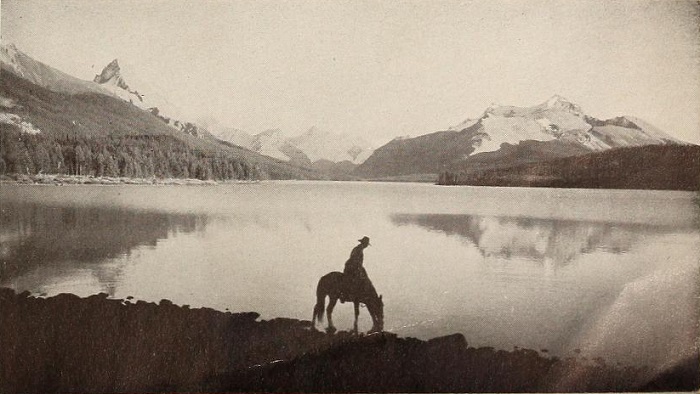 With music and sound effect scoring for double turntable presentation.

"Western Holiday offered one of those thrills in the sequence of sunrise on Mount Robson. Here Kodachrome caught, with what seemed magic, the first rosy glow on the cold, blue snow, which the continuity of photographic motion permitted to increase, to blossom and, finally, to blaze into a chromatic crown of jewels. To see this on the screen is to enjoy a rare experience. Hamilton H. Jones, in the highly intelligent cutting of his train sequences, gave the student of continuity another of these thrills. Those who are charmed by double turntable accompaniment will recognize the perfection with which an almost impossibly difficult feat of lip synchronization with record scoring has been handled. These are some of the higher spots in a film of unusually high general average. Mr. Jones is a Kodachrome movie maker of proved ability, who has made editing a special art. The film chosen for the first Hiram Percy Maxim Memorial Award will be used by Mr. Jones in his work as a lecturer on the vacation advantages of the Dominion of Canada, although it was made as his own enterprise, entirely at his own expense and not for compensation from a client. It is a part of his professional equipment. Briefly reviewed, Western Holiday carries the audience, via Canadian National Railways, from Victoria, Canada's most westerly metropolis, across the Rocky Mountains back to the Eastern Seaboard. Beginning with city views in Victoria and Vancouver, with strikingly colorful parades of the famous Canadian Mounted Police, we visit tourist centers and make trail trips from them. The camera goes into the interior of a glacier, it finds mountain goats and sheep, it clambers over the Continental Divide on horseback. All through the trip, it studies the progress of trains, weaving in and out of tunnels and over bridges. In his personal presentations of this film, Mr. Jones manipulates effects, such as whistles, bells, train noises and other oddments, with something approaching wizardry. In the face of competition of the highest order, Western Holiday is its own justification of preferment." Movie Makers, Dec. 1937, 602.

"A feature length remake in color of the black and white Canadian Capers, the picture was regarded by many as revealing for the first time the full technical and artistic capacities of Kodachrome." Movie Makers, Dec. 1950, 449. 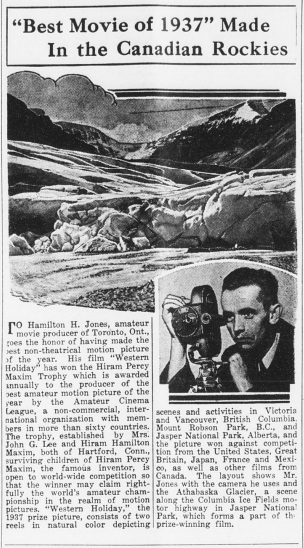