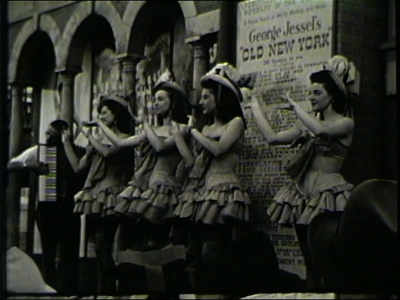 "Highly edited film opens on an array of print material on the New York World’s Fair. Cut to a view of the fair in the distance, possibly shot from the Empire State Building, with the Queensborough Bridge in the foreground. Detailed shots from the NYWF in 1939, including the Amusement Area, International Area and the Food Zone. Cyrus Pinkham is seen removing and discarding his shoes before walking off in his stocking feet. A sequence of views of the United States building, the George Washington statue, and the Theme Center leads into evening before fading out and cutting to an end title. Following the end title, Pinkham is seen removing a reel from his projector and speaking directly to the camera. End title: “That’s all. Good night.”" oldfilm.org