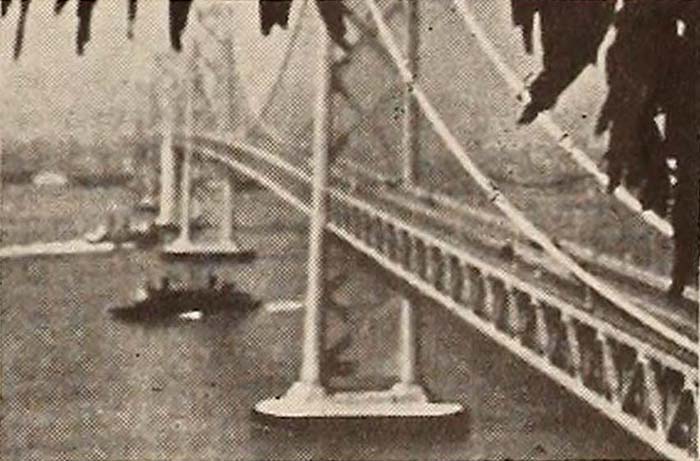 "To present, on 8mm. Kodachrome, where the problem of definition in distant shots is made more difficult by the greater screen enlargement in projection, a serious and satisfying architectural study of a structure that extends not a few hundred feet into the air, but thousands of feet horizontally, is a task that calls for skill in movie making. Raymond O'Connell, in San Francisco — Oakland Bay Bridge, has exhibited that skill and has to his credit, in this film, a definite accomplishment. The study is rendered comprehensible to the audience, at the very outset, by the use of a model of the bridge, which is introduced in the course of the picture, with excellent effect. In several instances, one passes from a shot of the model to another of the actual structure from the same angle, and so easily that it is possible to forget the cinematic labor put forth in finding a vantage point for the camera to show exactly what was needed. Of especial merit are shots of the changing pattern of the cables, made from a moving motor car, which provide a fine essay in abstract design." Movie Makers, Dec. 1938, 620.