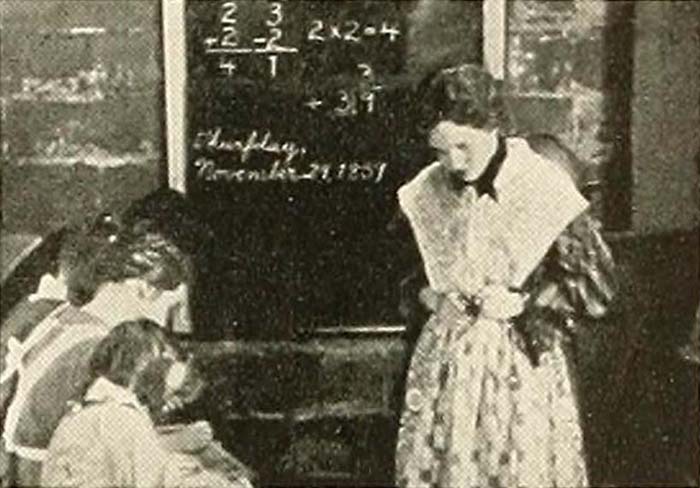 "The Birth of St. Mary's, by Robert F. Gowen. is a deeply moving and well nigh incredible accomplishment in amateur film production. Described as a chronicle in retrospect by the church that it pictures, the film moves bravely into the treacherous domain of costume drama and emerges triumphant. To recreate the gracious life of another day, to catch the feeling of its clothes and the flavor of its customs, to stage all of this against settings not only dramatically sound but full of beauty as well — such were but part of the problems of the producer. Perhaps greatest of all was the task of carrying on each step of this work with the willing, but often wilting, help of an entire community, the accomplishment, through infinite patience, of holding this group together for an entire year. Mr. Gowen has done it all superbly well. To this triumph of teamwork he has added sensitive direction, finished acting by his players and genuinely first rank color photography of largely interior setting. A double turntable musical score, carefully selected for historical accuracy, accompanies the production. The Birth of St. Mary's is a loving and lovely testimony, destined to increase steadily in stature as it becomes itself a part of the past." Movie Makers, Dec. 1937, 602-603.

"So accurate were the historical details in The Birth of St. Mary's, by Robert F. Gowen, ACL, that even the handset type used for the titles was more than fifty years old." Movie Makers, Jan. 1938, 8.

"Four hundred and fifty persons crowded the auditorium of the Washington School, in Ossining, N. Y., at the recent premier screening of The Birth of St. Mary's, a presentation made under the auspices of the Ossining Historical Society. Produced by Robert F. Gowen, ACL, the film tells, in 1000 feet of 16mm. Kodachrome, a retrospective chronicle of the founding and growth of St. Mary's Episcopal Church, at Scarborough, on the Hudson." Movie Makers, Nov. 1937, 549.

"The Birth of St. Mary's, to which we are now adding the finishing touches, tells, in Kodachrome, the history of St. Mary's parish in Scarborough since 1839. The picture, made for St. Mary's Church and supervised by St. Mary's Young People's Fellowship, begins with the first church services, which were held in a schoolhouse built by Dr. Creighton, then the rector. It continues with the planning and building of the present church in 1850 and ends with scenes of services in the church at the present day. The script called for showing the first church service held in the school, the first service in the then new church building, and it included historical incidents, such as the presentation of a bell for the church by Commodore Perry and the manufacture of the stained glass windows by John Bolton. Particularly important was the sequence showing Washington Irving planting the ivy with which the church is now covered." Movie Makers, July 1937, 328.