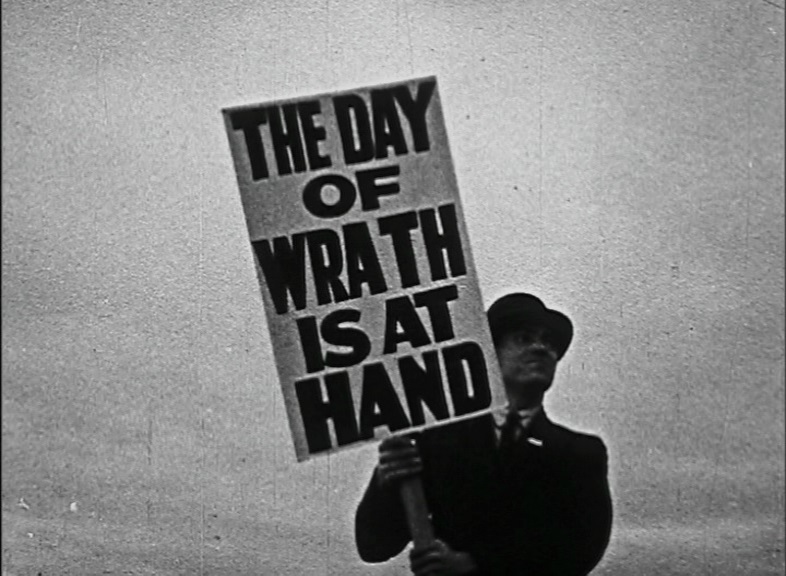 Still image from Doomsday via EAFA.

"Each year the contest sponsored by the American Society of Cinematographers through this magazine seems to bring forth a surprise. For several years the 8mm cinematrographers have been setting the pace, but never has any of them reached the goal achieved this year by Miss Ruth Stuart. Miss Stuart has been a contributor to this contest every year for the past three years; in 1933 she was given the medal for travel pictures. Her 200 ft. 16mm subject 'Doomsday' was also awarded honors in the British Institute of Amateur Cinematographers. In the American Society of Cinematographers contest just closed she was given a recognition for the Outstanding picture, in photography and Documentary pictures. It will be surprising to many that this unusual honor should befall a woman. Photography, by the unwritten law, is supposedly the realm of male species. Miss Stuart, however showed such a fine understanding of the value of pictures that move, how to fabricate these moving photographs into an interesting document that would hold any audience anywhere in the civilized world. For a person who films she must have developed a stony heart in order to cut as judiciously as the picture indicates. There is a tempo to the production that is very seldom achieved by an amateur. There are no obvious pet shots or scenes. Each sequence, each scene, each picture was left in production for a purpose to give it atmosphere to help the story along." American Cinematographer, Jan. 1937, 25.

"Well photographed, well planned film dealing with the contrasted fears of town and country folk and their reaction to catastrophe" (IAC 1975).

‘A fantasy based upon a fear which has preyed upon credulous minds from the beginning of time' is the maker's description of this ambitious attempt to show how people react to the possibility of a catastrophe and then to the real event. The story hinges upon a cosmic event that upsets the Earth's equilibrium, causes an imbalance of weather conditions and other natural forces, resulting in widespread panic’ (EAFA Database)."

Accompanying musical compositions chosen for a public screening of the film are listed in "Musical Mood and Tempo for the 1936 Prize-Winners" (American Cinematographer, Feb. 1937, 74-75, 78).

"Agricultural workers become aware of a strange phenomenon in the sky. People in rural locations discuss their observations. No-one knows what it is. Awareness of the phenomenon spreads; wildfires burn on heaths and panic is reported by newspapers. In the city, newspapers carry stories of earthquakes and changes affecting ‘the planets’. Extreme weather conditions are experienced. The changes are discussed on the streets. The day of final judgement is predicted by some. Uncertain of what is happening people hide indoors. A new day dawns and people venture outside. A large bright object fills the sky, collides with and destroys the earth." Via East Anglian Film Archive.