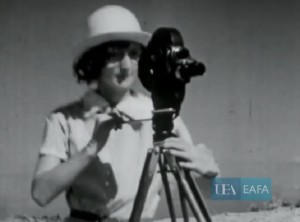 Stuart seen in Egypt and Back with Imperial Airways via EAFA.

Egypt and Back With Imperial Airways (1932)

Ruth Stuart Rodger was an internationally renowned amateur filmmaker; member of the Manchester Film Society; an Associate of the Royal Photographic Society; and winner of multiple awards across America, Britain and Europe.

The first of her films, RAF Pageant (1931), received a special award in The Era newspaper’s 1931 Amateur Film Contest. Ruth’s next film achieved even more accolades – and gained her more column inches in the UK national press as well. Egypt and Back with Imperial Airways (1931-2) was awarded a Gold Medal by the UK-based Institute of Amateur Cinematographers (IAC), a premiere award at the 3rd International Amateur Film Concord in Paris, and the gold medal of the American Society of Cinematographers.

Her status within the amateur film community was cemented by her next film, Doomsday (1936), a complex six-minute apocalyptic drama that offered a vision of the end of the world that owed a lot to German and Russian film movements. A trip to Kenya in the late-1930s saw her experimenting with 35mm film for the first time. The resulting film may have become N’Gomi, which screened at the Manchester Film Society in early 1937.

Ruth largely disappears from the historical record from 1939 until her death in 1982. However, Ruth’s films continued to be screened: Doomsday was shown across America in the early 1940s; and two of her films (Egypt and Back and Doomsday) were saved for posterity by the IAC Film Library and stored at the East Anglian Film Archive.