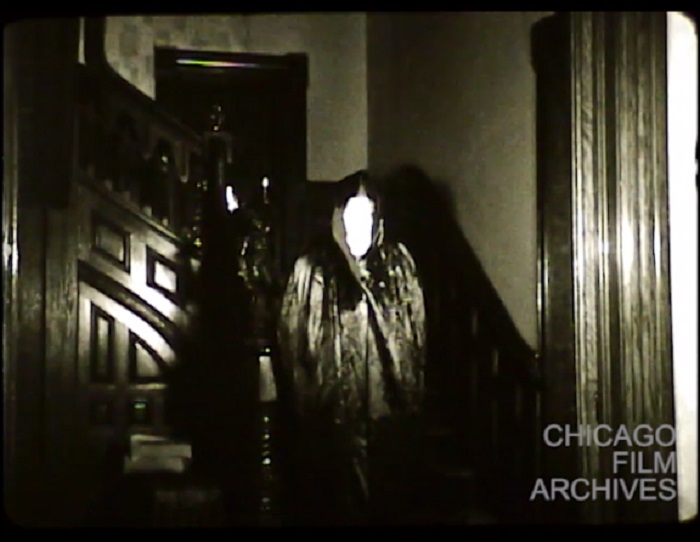 Still image from The Black Widow via Chicago Film Archives.

"A short mystery film from members of the Amateur Cinema League. A group of relatives gather in a haunted house for the reading of a will. Someone among them knows a secret about the house, and uses stories about the Black Widow to try and scare everyone away. In the end, their identity is revealed and all the secrets come to light. Title cards narrate the dialogue." Chicago Film Archives.

A "C&R" production, presumably Carl (Frazier) & Rosalie (Vandandaigue).
This film is a part of the Margaret Conneely Collection held by Chicago Film Archives.

"00:00 - Titles over footage of a caped woman and a toy spider: Member of Amateur Cinema League - Credits. 01:18 - Explanatory text over footage of a large house. Elias Crabtree recently died in a house once belonging to a murderous woman, who supposedly still haunts the place as a black widow spider. 02:08 - A man, breaking into the attorney’s office, reads Crabtree’s will and calls another man. The second man breaks into the house and secretly rigs wiring under the carpet. Everything is in CU and dimly lit. Many shots of ordinary things like drawers, clocks, doorknobs, shoes and a TS of streetlights. 05:28 - The next night the heirs gather for the reading of the will. The ominous housekeeper Hattie warns the sweet neice, Nan, and her beau Dick about spiders. MS and CU, taking place in a parlour. 09:03 - The rest of the family arrive: domineering Orpha and her spineless husband Quigley. Bossy Emma and a younger nameless girl. They sit together and bicker until Emma finds a dagger in the couch cushions. When the lawyer arrives he inspects the dagger and sets it aside. MS and CU in the entry hall and parlour,cutting back and forth between those assembled. 12:40 - The will is read, with a CU on the page of text and cutaways to the heir’s reactions. Crabtree jokingly bestowed things like a rock and raisins to his family members. 17:23 - He also left money. The house goes to Nan, who needs money for her student loans. Dick encourages her to sell it, and the lawyer offers to buy. But the appearance of a large spider distracts everyone. 20:12 - A new man, Robert Noland, suddenly arrives and offers to buy the house. A bidding war begins but Quigley claims to see the Black Widow and the company scatters to search for her. Camera follows Orpha extensively through the house, and cuts away to Nan and Emma as they speak in MS. 23:00 - A cloaked person in a mask makes their way down the stairs to the parlour and scares the young girl into a faint. Everyone returns and accusations fly. When Nan decides not to sell the house, the lawyer reveals that he knows a secret about it. 26:02 - A spinning title card reading “Lights” and “Push the Switch” appear. When the scene returns the lawyer has been stabbed. After another cutaway he is gone. Confusion results with more accusations and another search for the body. Characters move in and out of the room. 30:57 - Judd is alive in the closet and Nan is left alone in the parlour. Tension builds until Nan is attacked by the caped figure. Noland catches the figure, who is demasked and revealed to be Quigley. 32:24 - Exposition, with everyone milling about calmly. Newbanks Company wanted to buy the property for a large sum of money. Dick and Quigley schemed to frighten everyone and get it for themselves. They divulge the way they did it. Numerous cuts back and forth between people, frequently interrupted by narration cards. 35:26-36:41 - Noland’s role is revealed. He is part of Newbanks and is to marry Nan. The film ends with romance" via Chicago Film Archives.