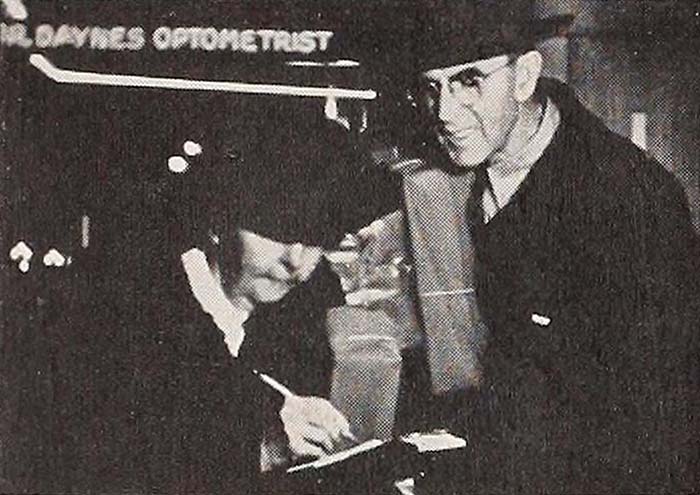 "A delightful film of the home is A Greene Christmas, produced by Mildred Greene. Here is a record of a domestic Christmas that may well serve as an exemplar to other movie makers who are tempted to wander far afield. No startling new stunts in technique or effects of continuity are displayed, yet the film is so homelike, pleasant and sincere that it commands recognition as an achievement. Naturally, however, all departments which contribute to the completion of the film are more than adequately handled. The interior lighting, which resulted in perfectly exposed color shots in the familiar home settings, is noteworthy. Special recognition should be accorded the successful, well exposed shots of the subjects out of doors at night in one sequence. All the actors, members of her immediate family and friends, including the producer, were naturally and pleasantly shown, but the palm for outstanding characterization must go to Miss Greene's mother, who played the part of herself in a most delightful and unaffected way. The preparation of the color titles for this film deserves special mention because of their perfect exposure, fine backgrounds and outstanding arrangement of metal script letters. (Miss Greene tells about making A Greene Christmas in Stretching Christmas, in this number of Movie Makers.)" Movie Makers, Dec. 1939, 609.

" 'A Greene Christmas,' a 12-minute film which took more than five months to make, was the movie which won the honor for Miss Greene. Associated with the Utah Amateur Movie Club of Utah, Miss Greene has been a movie-maker for little more than a year. The recognition she won in the contest, according to R. LeRoy Fletcher president of the Utah club, is outstanding, and is probably the first of its kind to come to a 'Utah photographer.' " The Salt Lake City Tribune, December 2, 1939, 9.