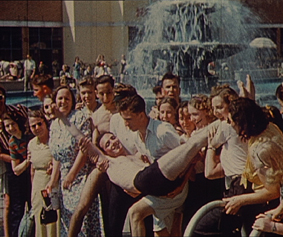 Still from Sunny Clacton via EAFA

Amateur colour film of a fundraising carnival and summer activities at Clacton-on-Sea in the month before World War II was declared. (EAFA)

"Clacton 'Hospital Carnival': there are floats and people in fancy dress. 'Miss Clacton' rides by on a float decorated with flowers. Views of spectators are intercut with the procession which includes bands and a fire engine. One of the floats advocates 'Peace'. At the fairground the big wheel is shown. People, including a vicar, ride on 'bucking bicycles.' There is a fast rocket ride, a big dipper and a carousel. At the entrance to a park, there are flags flying and shots of rose beds. The rest of the film is shot at Butlins holiday camp. Children play on trikes and people are on the promenade. There is a poster advertising camp entertainment, including Terence de Marney and Michael Carr. A 'Costume and Figure' Competition on Sunday, August 20th, shows women in bathing costumes. A poster announces that proceeds are donated to the Great Ormond Street Children's Hospital. There are pool scenes. Games and exercises on the beach include 'Comic Cricket' where the umpire is thrown into the swimming pool. A girl sits painting her nails with a bottle of nail vanish. Arsenal footballers Eddie Hapgood and Cliff Bastin judge another 'Costume & Figure' competition, also on August 20th. The winners pose with their prizes and the footballers. There is a 'knobbly knees' competition, and the camp comic sells tickets to a charity event at the Century Cinema. The final scenes are of the sea at sunset." (EAFA Database)