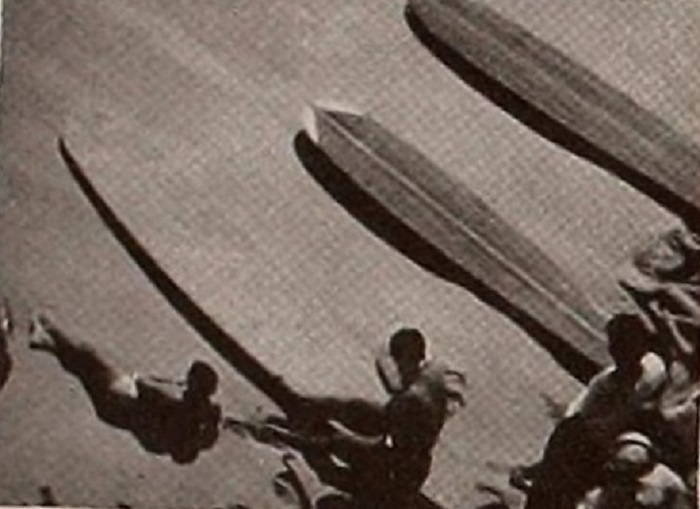 "With music on disc and with special music and sound effects on disc "spot recorded" by the filmer, together with narrative to be read in projection," Movie Makers, Dec. 1941, 539.

"Dan Billman, jr., has told you in the September number of this magazine how he came to make South of Honolulu. What he could not possibly put into words is the outright and amazing entertainment value of this elaborate record. Hawaii, for the Billmans, meant far more than the Aloha Tower, Diamond Head and the Kodachrome set piece of weekly hula dancing. In their place this adventurous couple found — some 200 miles south of Honolulu — the calm beauty of native life, the exciting patterns of native fishing and feasting and the exotic loveliness of tropical blooms against their true backgrounds. For them, no filming task seemed impossible. Their achievements range from an amusing sequence of the "'sea going" cowboys of the Hawaiian coast, to a striking and incredible study of religious ceremonies within a Buddhist temple. Mr. Billman's beautifully filmed production, accompanied throughout with sound and music personally recorded in the Islands, has the full bodied stature of mature screen entertainment." Movie Makers, Dec. 1941, 564.