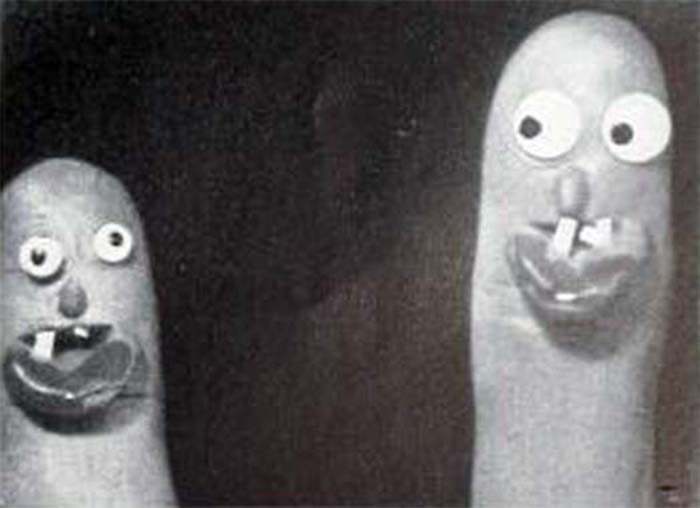 "A perfectly delightful holiday in personal filming, replete with humor, and imagination, is the comedy, Nite Life, produced by J. Kinney Moore, entirely in Kodachrome and, what is more, almost entirely in interior Kodachrome, by artificial light. Mr. Moore, in his work, refutes the contention, sometimes heard, that the amateur should be wary of film comedy. And, beside negotiating this pinnacle successfully, the producer has added an outstanding technical handling of Kodachrome, as well as a highly diverting and intelligent use of the various camera illusions it is possible to produce with the aid of modern 16mm. equipment. The obvious zest and pleasure with which the actor producer entered into the creation of this film add immeasurably to its value as a genuine document of personal filming achievement. Examples of carefully planned and executed trick photography follow one another in such rapid succession in the film that the spectator is left time only to gasp. However, these tricks are not executed simply for their own sake, but strictly in accordance with the furtherance of the plot. It must be said that, in the second part of the film, the author does yield slightly to the temptation of attenuating the action somewhat in order to spin out his bag of tricks. But the film as a whole is so delightful that any audience could easily forgive this small shortcoming." Movie Makers, Dec. 1936, 542.

An article in Movie Makers (Nov. 1936, 533, 559) was written by J. Kinney Moore about his film, detailing how he made the film (difficulties with production, filming his house cat Tom, and how the title and end credits were made).

"Nite Life was a farce about the difficulties of sleeping during bad dreams, ringing alarm clocks, and every other imaginable annoyance occurring in a night in the life of the filmer." Movie Makers, April 1946, 162.

"Nite Life, that knockout Kodachrome comedy, has been in production since January first of this year, at an average working time of four hours a day. After just missing a mention last year, J. Kinney Moore, ACL, took but one New Year's resolution — to make a Ten Best film or bust. The result arrived at League headquarters in a specially built container, padlocked and insured for $5,000." Movie Makers, Dec. 1936, 565. 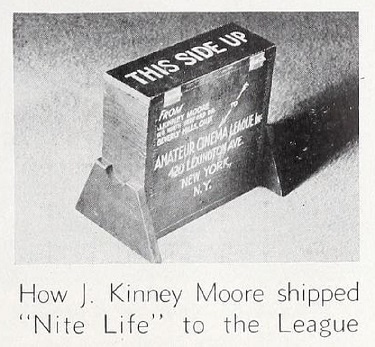 Accompanying musical compositions chosen for a public screening of the film are listed in "Musical Mood and Tempo for the 1936 Prize-Winners" (American Cinematographer, Feb. 1937, 74-75, 78).

This film was available in the ACL's Club Film Library.