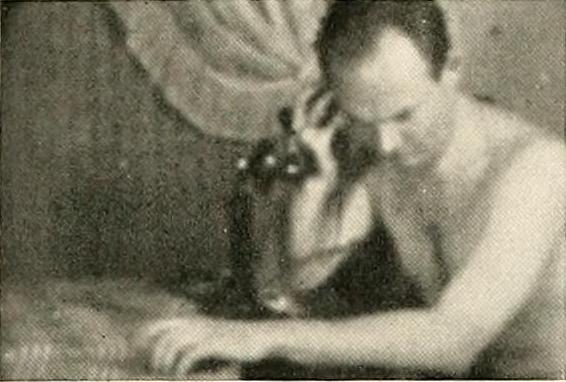 "Beach Holiday, an 8mm. story in Kodachrome, deserves high praise because of its smooth and interesting treatment of material that is directly within the reach of every movie maker. Made by Raymond O'Connell, this subject is a fine example of natural continuity, done in a simple, straightforward manner. The interior shots, which show the family getting up in the morning, their planning and preparation for a day at the beach and, at the end of the film, their return home, afford excellent examples of good exposure and technical work on 8mm. interior scenes. Many of the transitions are well planned, notably a clever shot which shows the final packing of the picnic hamper at home. Its cover is raised in the kitchen, so that the hamper fills the entire frame. The cover is then lowered, revealing a beach scene in the background. The outdoor work gives an excellent exposition of a day at the beach, complete with swimming, sports and boardwalk amusements." Movie Makers, Dec. 1937, 628.

"Raymond O'Connell. ACL, of Oakland, Calif., wins the gold star this month for the striking transition which he has woven into the pleasant fabric of his Beach Holiday, a two reel. 8mm. Kodachrome record of a seashore excursion. Early in the film, he and Mrs. O'Connell are shown making their happy preparations for the day's fun. From the medium shot which discloses them bustling about the family kitchen, the camera slowly tilts downward to rest on a full frame closeup of the open picnic hamper, now nearly packed. Then, seemingly without a break, the view tilts upward once more. Beyond the hamper's cover, the kitchen has vanished, replaced smoothly by the sunny sands of the beach! It's all pretty swell and gave us a little shiver of delight when we first saw it on the screen." Movie Makers, April 1937, 178.