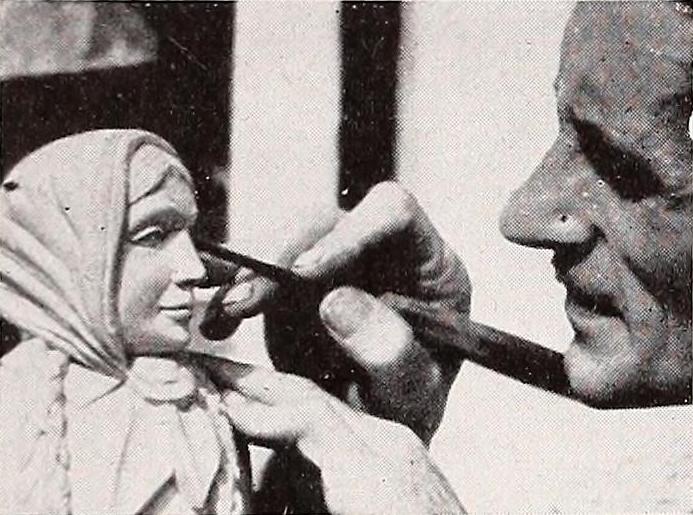 "Nine times a place winner in seven years of Ten Best competition, Frank E. Gunnell has probably done his best work to date in Baie St. Paul. The film is a bright and sunny visit to the little French Canadian parish of that name, nestling in parochial contentment along the St. Lawrence. Central in this existence stands the baroque and inevitable church, while about it one finds the familiar family names of the village butcher and baker, doctor and dressmaker, recurrent along the cobbled highways. Here too is an intent, sharp featured little woodcarver, a housewife coolly competent about her embroidery and an aloof mademoiselle who presides with dazzling beauty over an ancient spinning wheel. Packed with this essential human interest, Baie St. Paul was filmed with the sparkling competence that one has for years expected from a Gunnell production. Its editing fits shrewdly into the pastoral mood of the subject matter, while its titles, both in their wording and execution, are colorful and in good taste. Baie St. Paul should take a high and honored place in the Gunnell catalog of fine films." Movie Makers, Dec. 1944, 477.

This film is a part of the Ministry of Culture and Communications fonds held by BAnQ. See the CESIF listing of this film for more information.

The film was the first prize winner of the National Film Board of Canada's "Come to Canada" Film Contest in 1943. Gunnell's reward was $500.00 and a three week, all expenses paid tour of Quebec. The film was reportedly to be distributed by the NFB after World War II (Movie Makers, March 1943, 118). CESIF notes that the film was distributed by le Service de ciné-photographie de la province de Québec.