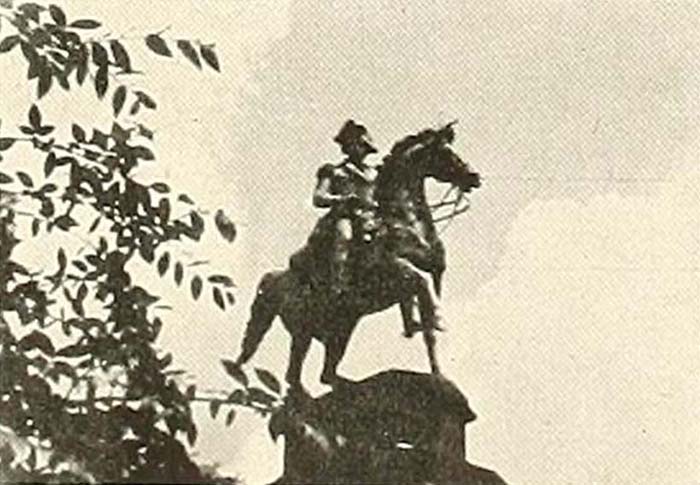 "To love a place so well that you can film it so well that the result becomes commercially sought is not the happy fortune of every movie amateur. Waldo E. Austin's Richmond Under Three Flags was paid for by the Morris Plan Bank of Virginia, in Richmond, and is distributed by the Virginia Conservation Commission. Here, a man of culture and a filmer of exceptional care and refinement has given us his own home, lovingly and interestingly presented, with a happy quota of cinematic ornaments. The pace of this accomplishment is leisurely, as was the Old South, yet its manner is modern, as is the new Richmond. In the title wordings, Mr. Austin is especially fortunate, avoiding banality on the one hand and '"fine writing" on the other, with just enough rhetoric to give the flavor of one of the country's most rhetorical centers. The interior scenes of public buildings have been accomplished with an apparent effortlessness that conceals a great deal of effort. Here is the publicity film in its most suave expression." Movie Makers, Dec. 1937, 627-628.

The film was offered on free loan by the Virginia Conservation Commission, as advertised in Movie Makers (April 1939, 154).

"Within a month after its premiere, the Ten Best winner of 1937 in the special class, Richmond Under Three Flags, was screened seventy three times to an aggregate of 11.000 people." Movie Makers, Feb. 1938, 73.

"An excellent film for the social sciences and well adapted for use on the elementary, junior high school, senior high school and even college level. The first reel presents in rapid succession a progressive series of the commercial and industrial aspects of the city, emphasizing its importance as a modern city of this country. Then a transition is made to a study of the city's historical shrines from the colonial and confederate eras. This is followed by glimpses of the present day cultural institutions of Richmond including the University of Richmond and Battle Abbey (Confederate Memorial Institute) and its beautiful botanic garden. This picture was adjudged one of the 'The Best Non-theatrical Films of 1937' by 'Movie makers.' It should prove an excellent visual aid for club groups interested in our country's history as well as for schools." Educational Film Catalog, 1939, 275.

"As the title suggests, the object of this film was to show that Richmond, Capital of Virginia and once Capital of the Confederacy, has served under three different flags from the year of her founding 1737, to the present date. They are the flags of England, of the Confederacy, and of the United States. The Morris Plan Bank of Virginia presented this film which was distributed by the Virginia Conservation Commission. Modern Scenes The prologue of this picture showed scenes of modern Richmond with her tobacco manufacturing, her transportation facilities, and other aspects of her commercial life. One of the scenes showed the Lucky Strike tobacco factory and some of the processes which go into the making of a cigarette. This clearly illustrated the great part which tobacco plays in Richmond's commercial life. Other scenes gave some interesting views of the historic James River and the various methods of transportation employed in Richmond. Historical Richmond The major portion of the film, however, dealt with the historical, the scenic, and the cultural life of the city. It included scenes at numerous historical places of interest in Richmond. Among these were St. John's Church, where Patrick Henry made his famous speech, the White House of the Confederacy, the Valentine Museum, the Poe Shrine, Battle Abbey, Capitol Square and State Capitol building, St. Paul's Church, Virginia Museum of Fine Arts, the Carillon, and Hollywood Cemetery. The film gave also beautiful views of Byrd Park, Maymont, the University of Richmond, and the Country Club of Virginia. It devoted a few scenes to Monument Avenue, adorned with numerous trees and statues, Richmond's tribute to the South's fallen leaders. The film lasted about twenty-five minutes." Monocle, Volume 11, Number 4, 5 November 1937.