Film Record: Meshie, The Child of a Chimpanzee 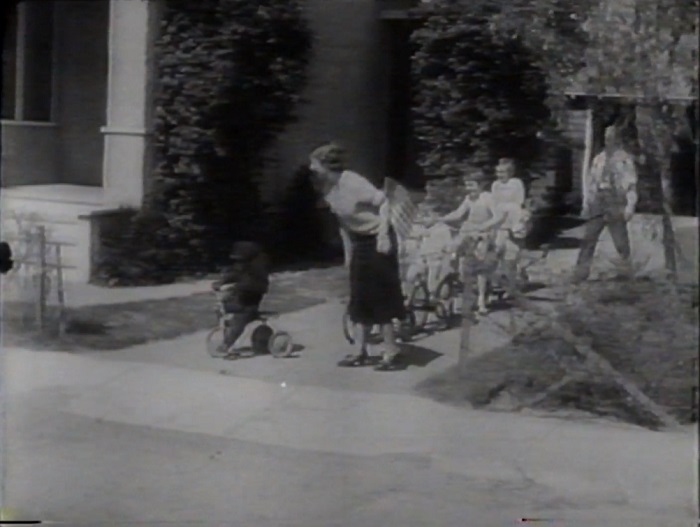 Still image from Meshie, The Child of a Chimpanzee via The New York Times.

"This film records, in the informal style of a home movie, some of a young chimpanzee's (Pan troglodytes) activities while raised in the Ravens' home. She plays with a hose, joins in games with the Raven children, manipulates tools, encounters snakes and mice, writes with a pencil, eats with a spoon, rides a tricycle, and feeds a human infant." University of Wisconsin-Madison Libraries.

"By 1934 Meshie, now seventy pounds and as strong as a man, had become unmanageable. She was sold to the Brookfield Zoo in Chicago where she died in 1937 after giving birth to a daughter. Her remains were returned to the AMNH for preparation and she presently can be seen in the Hall of Primates, sitting on a log, her chin propped up on her knuckles, looking pensively at all who pass." American Museum of Natural History.

This film is held by the American Museum of Natural History.

"This film records Meshie's domestication and behavior at the Raven's home. She is seen unlocking locks, untying knots and shoe laces, eating with a spoon, drinking from cups and with straws, bathing, riding her kiddie car, shovelling snow, pulling sleds, playing with a water hose, reacting to other animals (small and large snakes and a mouse), and leading a parade of children on bicycles. An entire sequence is devoted to Meshie's maternal instincts as she cares for Mary, the Raven's newborn daughter. She gives Mary a bottle, holds her, and cleans the high chair after feeding her," via the American Museum of Natural History.