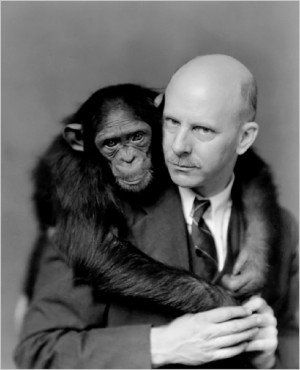 Raven pictured with Meshie the chimpanzee, via The New York Times.

"Henry Cushier Raven (1889-1944) was born April 16, 1889 in Brooklyn, New York. He began his zoological career in the Department of Preparation of the American Museum of Natural History in 1907. While there he worked with Jesse D. Figgins and Herbert Lang, noted taxidermists. When Figgins moved to the Colorado Museum of Natural History in 1910, he took Raven with him. In 1912, the Smithsonian Institution and William Louis Abbott were looking for a young collector and explorer to carry on Abbott's work in the East Indies. Hearing good reports regarding Raven, they hired him; and he spent most of the next six years in the islands. His travels in the Pacific took him to Borneo, the Celebes, and the Moluccas. Raven entered Cornell as a special student in zoology in 1918 and also served as Curator of the zoology museum. In 1919, the Smithsonian again employed him as a field collector, this time for the Cape-to-Cairo African Expedition. Upon his return in 1920, he entered Columbia and there studied comparative anatomy under William King Gregory. From 1921 to his death, Raven was employed by the American Museum of Natural History as a collector and Curator of Comparative Anatomy. He also held appointments with New York University, 1924-1926; Columbia University, 1926-1944; Johns Hopkins University, 1936-1938; and the New York Zoological Park, 1921-1944. Raven's major research contributions dealt with the distribution of animals in East Asia, the sperm and beaked whales, and the comparative anatomy of primates, especially gorillas. He passed away, April 4, 1944, possibly from an malarial infection contracted on his expedition in 1912 to Borneo and Celebes." Smithsonian Institution Archives.