Film Record: In the Valley of the Hudson 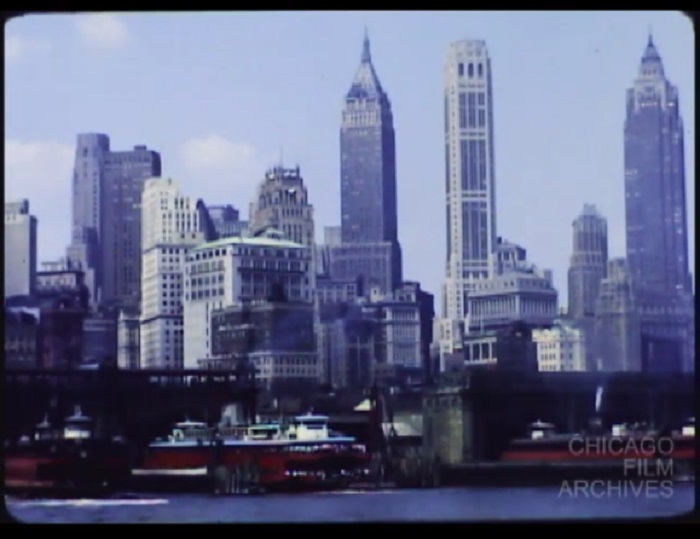 Still image from In the Valley of the Hudson via Chicago Film Archives.

"Two part edited travelogue taking place in the Hudson Valley area. Part one begins at Coney Island, and then takes viewers through New York City before heading to places such as West Point and Poughkeepsie where cough drops are being made. Part two Includes much footage on Hudson river, the process of manufacturing wallpaper at Imperial Color and a visit to the North Pole theme park." Chicago Film Archives.

This film is a part of the Julian Gromer Collection held by Chicago Film Archives.

"PART 1/2 00:09 - Titles and map. Var. scenes at Coney Island; crowded beach, people on the boardwalk, rides such as the Cyclone roller coaster, bumper cars, parachutes. Nice LS PAN of the beach and park from the water. Boats and workers in the harbor, boys swimming and diving. 05:07 - LA of Statue of Liberty from Bedloe/Liberty Island, dissolving closer until you can see people waving from the crown. LS still of New York skyline. TS from a sightseeing boat; skyline from two sides, industrial areas, going under bridges, RMS Queen Mary. 08:59 - Beautiful TS and stationary footage of the streets, stores and pedestrians of New York City. Puncuated with landmarks; TILT UP Empire State building, Prometheus at Rockefeller Plaza, the corner of Wall St. and Nassau, boats in the Central Park pond. 14:00 - Var. neon signs in Times Square at twilight and night. 15:29 - ES of a cruise ship. TS from a cruise ship on the Hudson River; green hills, residential and industrial areas, a floatplane taking off, other boats, footage of fellow passengers. 18:44 - Scenery and recreation around Bear Mountain State Park; HA of a pool, walking along paths, archery and a child playing golf. TS from a car. The grounds of West Point as seen from boat and car. Var. shots of Battle Monument, cadets assembled and marching. 23:50 - HA TS from a tram going up a hill. TS of Newbury, NY houses and scenery. Canning cherries in a factory beginning at watering the trees, to MS amd CU of cherries on conveyor belts being inspected, pitted and canned. 27:51 - People on deck of the cruise ship, with TS of shoreline. Manufacturing Smith Brothers cough drops in Poughkeepsie. Follows the process from pulling and rolling the heated mixture to assembly line boxing. Mostly CU and MS on machines, with the occasional worker in view. 32:59 - Footage of and from a motor boat. TS of Hyde Park, NY stores and houses. Var. exterior and interiors of Roosevelt’s house, rose garden and gravestone. PART 2/2 00:01 - Motor boat and a flowing dam, normally and in reverse motion. TS, PAN and still of green scenery of the Catskill Mountains. People painting outdoors, MS and CU. Motor boats circling, one take in slow motion. 04:20 - Downtown Albany, NY with focus on Capitol Building and Alfred E. Smith Building. HA, ELS PAN of city. Tourists at Fort Crailo. MS and CU of “Uncle Sam’s” tombstone in Troy. A building and canon at the American Entrenchments of two battles fought in 1777. TILT DOWN and CU of an unidentified monument. 08:05 - Steo by step wallpaper manufacturing at Imperial Color Corporation in Glen Falls, NY. ES in the outside yards, where a man holds raw minerals. In the factory the process goes from mixing paint and inspecting pigments to prepping the design and rollers for surface printing. Follows rolls of paper through the cylinder printing process. Much in CU, with a nice focus on creating the metal and rubber designs on the printing rollers. A man unsuccessfully attempts to wallpaper the ceiling, a theme that repeats randomly through the rest of the film. 17:30 - Vacationers at a lake and horseback riding. LS with a good amount of scenery. Var. PAN of the lake and shoreline. Var. views of boats going through a small lock, one take in fast motion. Children on a motorboat at a different lake. TS of var. scenery and people, with other passengers occasionally in frame. 23:21 - Deer in a field in LS and MS. Man bottle feeding a lion cub in MS. Squirrels in MCU eating. 26:02 - At the North Pole theme park. Follows a costumed girl in an elf hat as she walks through the grounds in LS. MS and CU focus on var. activities; a wishing well, children on a pony ride, a Little Bo Peep with lambs, feeding reindeer, marionette show, children with Santa. Film ends with a LS view of the source of the Hudson River." Via Chicago Film Archives.