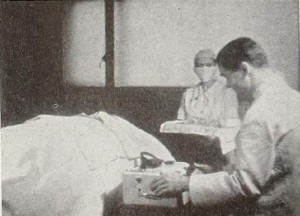 "We have seen many medical and surgical films made by Dr. Robert Mallory, III, and most of them have been excellent. This one, however, a picturization of an extremely delicate operation on the eye, surpasses them all. It is a suave and exact record of the complete operation, featuring splendid full frame closeups of the eyeball. The exposure and filming technique are flawless except for one or two scenes in slightly soft focus. We are well aware of the difficulties encountered in making a film of this kind, and we feel that Dr. Mallory has scored a distinct triumph here. He is an exceptionally neat worker, and the entire film shows the effects of care in production and editing. Movie makers who have aspirations to become filmers of medical or surgical material could well take this film for a pattern." Movie Makers, Dec. 1942, 508.

"In Surgical Eradication of Pyorrhea, Dr. S. H. McAfee, ACL, made use of a very fine closeup technique and, in presenting the preliminary clinical information, plaster models played an important part. The work was shown step by step so that certain points could be watched more closely later on. The very difficult problem of lighting oral surgery for good photography was well handled and the resulting exposure and definition were eminently satisfactory." Movie Makers, Dec. 1933, 524.

Technique and Principles of Spinal Anaesthesia with Nupercaine, The 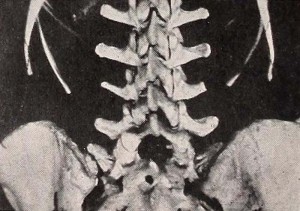 "Imagine, if you can, a subject which would be harder to present in motion pictures than the effects of a spinal anaesthetic. This is the problem that Leslie P. Thatcher solved so ably in his Technique and Principles of Spinal Anaesthesia with Nupercaine. Because most of the action takes place within the body, it was necessary to do some real thinking before a suitable motion picture presentation could be worked out. For example, the action of the fluid as it floats in the spinal canal was shown dramatically and effectively by floating some of the drug in a solution in a slowly tilting glass phial. A considerable use of X-rays served to show clearly just how the hypodermic needle should be handled, while well photographed diagrams and models aid the film's clarity. Operative scenes represent the best technique, and the action clearly demonstrates the qualities of Nupercaine as an anaesthetic. The picture is a study in straightforward exposition and, as such, it should serve its sponsors admirably. It is to be noted that Mr. Thatcher showed admirable restraint in his brief shots of operations. While sufficient for the medical man, they are not too long or gruesome for a lay audience." Movie Makers, Dec. 1939, 633-634.

"In Thyroidectomy, Henry M. Lester, ACL, has combined all the essentials of the perfect medical film. The delicate color gradations of tissues that mean much to the surgeon are clearly evident, due to excellent exposure, lighting and suitable film stock. Thorough presentation of the operating technique is given by means of suitable telephoto lenses and properly placing the camera in relation to the surgical field. An unusual feature of this particular operation is the large number of instruments which necessarily must remain in the field most of the time, creating a difficult problem for the photographer in that the many shining surfaces tend to produce undesirable reflections. However, Mr. Lester has solved this problem to perfection. The film is a result of the combination of highly specialized skill, equipment designed for the purpose and an exact knowledge of the requirements for the perfect surgical film." Movie Makers, Dec. 1934, 534.