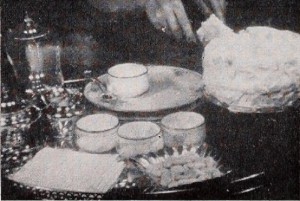 "Out of his own experience and happy recollections, Sidney Moritz presents in telling terms a warm and affectionate recounting of the marriage and honeymoon. A bright sun filtering through the stained glass of the church lights the solemn exchange of vows amidst swelling organ tones. The scene dissolves to preparations for the honeymoon, the contentment of a pastoral setting, the first months of life together, the small details that contribute to gracious living, and finally a fond recalling of the beginnings — the stained glass and sunlight, two people in love, the music and the prayer. A sympathetic scoring complements this sincere and moving record film." Movie Makers, Dec. 1948, 496. 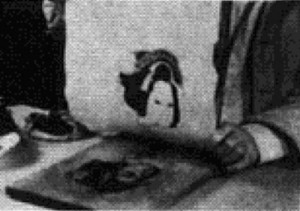 "Wood block printing is one of the highest forms of art in Japan. It was first introduced into that country 2000 years ago, from China. With hammer and chisel, various cuts are made in the wood block to create the pattern to be printed. A separate block is cut for each hue. The form of each block is inked and impressed upon the paper or cloth or obtain the complete print. The picture takes us gently stimulate our interest in the art of wood block printing. we are privileged to see some of the exquisite prints. The narrator's voice with its oriental flavor adds a delightful touch to the picture. This will be included in the Package" PSA Journal, Oct. 1962, 34. 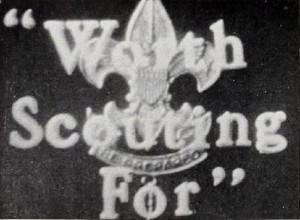 "With the vitality of youth, the wonder of the woods and adolescent hunger for adventure, you have the ingredients for an excellent movie. Al Morton accepted the challenge offered by them, and turned out an interesting and competent film. Worth Scouting For has the indefinable quality that comes from fine filming, innate good taste and an understanding of boys' ways in the woods. Taking two independent youngsters and a large Boy Scout troop, Mr. Morton skillfully weaves a good story, based on the scorn of the two boys for the "sissy stuff" of Scouting. Both the troop and the boys go camping in the same area. The untrained campers make the mistakes avoided by the Scouts. They eat cold food because of their inability to build a fire; they become ill from smoking cigarettes which they have stolen; one almost drowns and is rescued by a Scout. They learn their lesson and decide that to "know how" is intelligent, not "sissy." A fine ability to film and direct youngsters with success makes Worth Scouting For an excellent picture which will be a delight to the actors in years to come. That, in itself, is a high accomplishment." Movie Makers, Dec. 1945, 495.

"Y West Side, the joint production of Robert Coles, ACL, who directed the film, and Charles Coles and Edwin Schwarz, ACL, who photographed it, is a very successful publicity picture for the West Side Y. M. C. A. in New York City. Starting with the social and dormitory facilities of the "Y," the film carries the audience on a tour of gymnasiums, special exercise rooms, roof courts and pools. The abundance of athletic and exercise equipment is shown clearly in sequences of their use, and the carefully planned action throughout the picture maintains interest and continuity. This film is distinguished by excellent photography and by the successful solution of the innumerable problems in handling large scale interiors and group action. Ingenious adaptations of games and exercises were sometimes required in order to fit the scene to the camera field, determined by the exigencies of the space available. The talents of the three producers were so integrated as to make the enterprise an outstanding success." Movie Makers, Dec. 1935, 555.