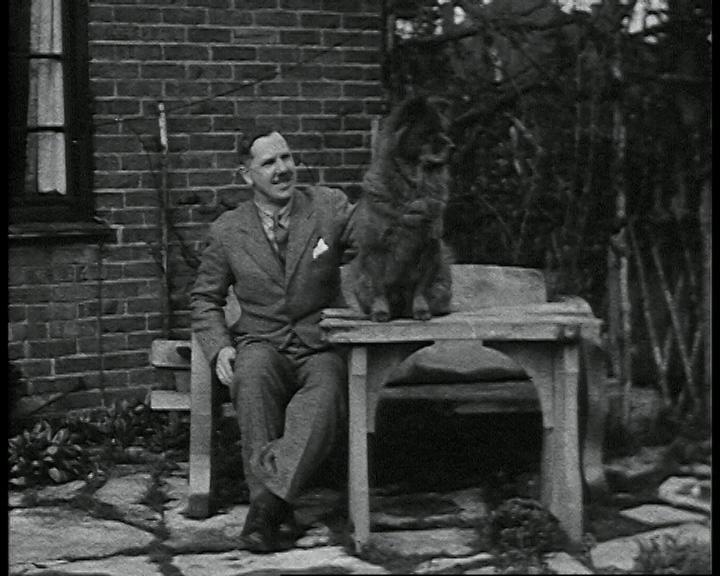 Still from Our Dogs via EAFA

"Film of the Chow Chow dogs owned, and possibly bred, by Eustace and Eunice Alliott in the mid/ late-1930s. Shot primarily in the gardens of the Alliott house in Amersham" (EAFA Database).

"scenes include: Eustace and Eunice Alliott posing, sitting or playing with adult or puppy Chow Chow dogs. Shots include: a Chow Chow (Ching) with her soft toys in a basket outside the Alliott house; the dog is lifted out by Eustace, and tries to bite him; a Chow Chow puppy (Shansi) is filmed on a garden bench playing with a soft toy, an older dog, possibly Ching is close by; Eunice plays with Shansi; the puppy returns to its soft toy; Eunice gives Shansi a treat; Eustace with adult dog (Rochow Ambrose); two puppies sleep on a cushion in a conservatory; Eunice lets dogs out door and feeds treats, plays with or poses the puppies for the camera in the garden; the puppies and the dog play on the lawn; close shots of adult Chow Chow dog; dogs play in a pen; close shots of Chow Chow dog; dogs play on lawn; dog runs to Eunice; Eunice carries dog on patio, poses for camera; Eustace sits on garden bench with one/ two Chow Chow dogs; dog on walk in the countryside runs freely, exploring river or lakeside/ in the woods" (EAFA Database).