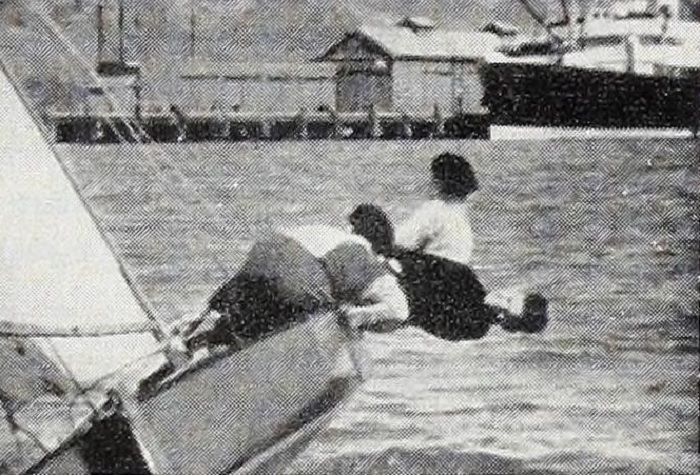 "New Zealand's South Island is the one treated in this production, one of two which Ernest H. Scott made during a prolonged visit Down Under. The awe inspiring Southern Alps have been recorded here with expert camera work and pleasant composition, and the whole impressive terrain of this part of New Zealand is appealingly set forth. The musical scoring, while standard, is adequate to the purpose. The narration is capably written and professionally delivered. If a need for more closeups is felt occasionally, it should be remembered that the large land itself is the star in New Zealand Holiday." Movie Makers, Dec. 1951, 412.

This film is held by Ngā Taonga Sound & Vision (The New Zealand Archive of Film, Television and Sound).

"Beginning in Nelson, Mr and Mrs Scott take a holiday in the South Island. Scenic shots taken around Nelson include Trafalgar Square and yachting at Tasman Bay. Activities filmed during a Children’s Day include boys and girls running and sack races, a picnic lunch and the Christchurch Pipers Band. Scenic views taken around the Wairoa Gorge include another picnic, bathers diving into the river and men fishing. A truck travels along the beach at Farewell Spit. The commentary gives information about the bird sanctuary, there are close ups of godwits and black swans.

Buller Gorge. Scenic views, taken from the car, of the Buller river and landscape, the Punakaki Rocks are viewed on the way to the Franz Josef Hotel. A tour party leave the hotel and take a native bush track to the glacier. Fabulous shots of the party on the glacier and the source of the Waiho River. The tour party guides execute a difficult climb on the pinnacles of the glacier.

The Scott’s reach Gillespies Beach, Westland near Fox Glacier. The film and commentary pay tribute to the beautiful lakes in the area, particularly, “lovliest of them all, Lake Matheson.” Guide, Mike Sullivan, prepares a group for a trip up Fox Glacier. The trampers begin their journey and stop for a picnic lunch before climbing the glacier. The film turns its attention to sheep farming with general shots of shearing and branding while the commentary mentions fine New Zealand lamb.

Christchurch, “every road leads to Cathedral Square”. General views include street scenes taken around Cathedral Square, kyakers on the Avon, the Botanic Gardens and Sumner Beach. Views over the McKenzie country to the Southern Alps, Mt Cook and Lakes Tekapo and Pukaki. The motor coach carrying the Scotts arrives at the Hermitage, people disembark and off-load their luggage. The visitors next prepare for a trip to the Tasman Glacier. Great shots of the trampers ascending the glacier, ice caves, cravasses.

On the road again, general views taken enroute to Queenstown. The summit of the Crown Range and cautionary road signs feature. Views of Queestown and Lake Wakatipu. Skiers on Coronet Peak. The botanical gardens at Queenstown. Boarding a launch on Lake Te Anau for a site-seeing trip. The tour party stop for a picnic lunch, the commentary waxes lyrical, “you haven’t lived if you haven’t experienced a picnic New Zealand-style.” Aerial shots taken over the south end of the Southern Alps. Scenic views taken on the drive to Milford Sound, general scenes of native bush and waterfalls in the Egglington and Holyford Valleys and at Lake Gunn. Hikers in the Holyford Valley boil their billy and invite the Scotts to lunch. General views of Milford Sound. Shots of dolphins swimming off the bow of a boat. People on the boat haul up full crayfish pots and later fish for blue cod. Views on the lake and of Bowen Falls." Via Ngā Taonga Sound & Vision.