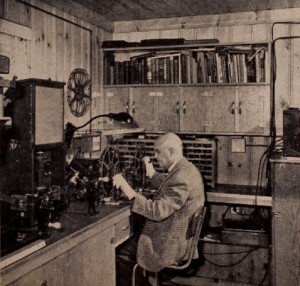 "Ernest H. Scott, founder of E. H. Scott Labs., Chicago, and a pioneer in custom-built radio set manufacture, died in Vancouver, B. C. Oct. 27. He made his home there the last two years. Mr. Scott sold his interest in the firm in 1944 after manufacturing custom radio sets since 1923. He was born in Australia and served three years with the Australian army in France during World War I. During World War II he helped sponsor the Anzac Hospitality Center for servicemen in Chicago." Broadcasting, Nov. 5, 1951, 96.

Written a few years before Scott's death, in "Ernest Scott - How he makes his de luxe travelogues" (Home Movies, Aug. 1949, 409): "One of the finest amateur photographic editing laboratories in Canada is owned by Ernest H. Scott, who now lives in the city of Victoria, on the southern tip of Vancouver Island in British Columbia. Though he is a simon-pure amateur, his films have professional excellence. A native New Zealander and the former president of E. H. Scott Radio Laboratories in Chicago, Scott now spends most of his time making motion pictures in color."

Some of Scott's films are held by Ngā Taonga Sound & Vision.