Film Record: Lend Me Your Ear 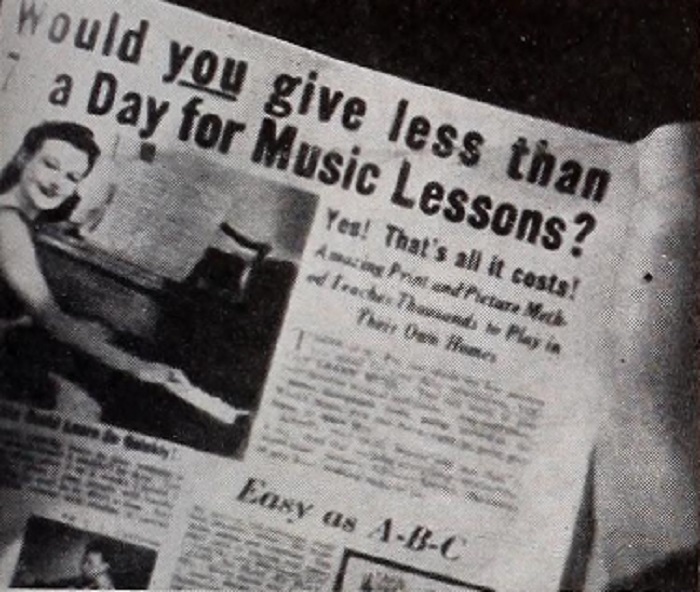 Still from Lend Me Your Ear featured on the cover of the December 1943 issue of Movie Makers.

"Lend Me Your Ear is an almost perfect synthesis of shrewd planning, impeccable camera work, smoothly integrated music and general, overall charm. It is gay, glamorous and in good taste. In it, Erma Niedermeyer has caught the lighthearted spirit of 'teen aged American youth. That she was amply aided by her own attractive son was her further good fortune. As the film opens, the Boy is discovered musing over that classic advertisement which guarantees to teach you piano in ten easy lessons. "You too can be the life of the party!" it clarions. The Boy answers the call, the lessons start arriving and the fun begins. There is the light "running gag" of the harried postman, continually overwhelmed by the Boy's enthusiasm as he delivers each new installment; there is the time the piano refuses to play, clogged up as it is by a basketball in its "innards"; there is the tousle headed imitation of Franz Liszt at the age of fourteen — and more. There is, in climax, the Boy's devastating triumph amid a bevy of admiring beauties, as he becomes in truth "the life of the party." Geared to these sequences — which are presented in swift pace and with unerring command of the camera — is a musical accompaniment as suave as the film itself. A single commercial recording provides a slight and recurring background theme. All the remaining score — from the first hesitant scales to the final rocking rendition of a jazz hit — is in the Boy's own playing, especially recorded by Mrs. Niedermeyer to fit her own picture. It is an ineffable and irresistible combination, this Lend Me Your Ear, warmly deserving of the high honor it has won." Movie Makers, Dec. 1943, 457.

Discussed by Niedermeyer in "Fun in a Family Film" (Movie Makers, Jan. 1944, 9, 35-37). The article describes the film's production, and lists the piano compositions featured in the film.