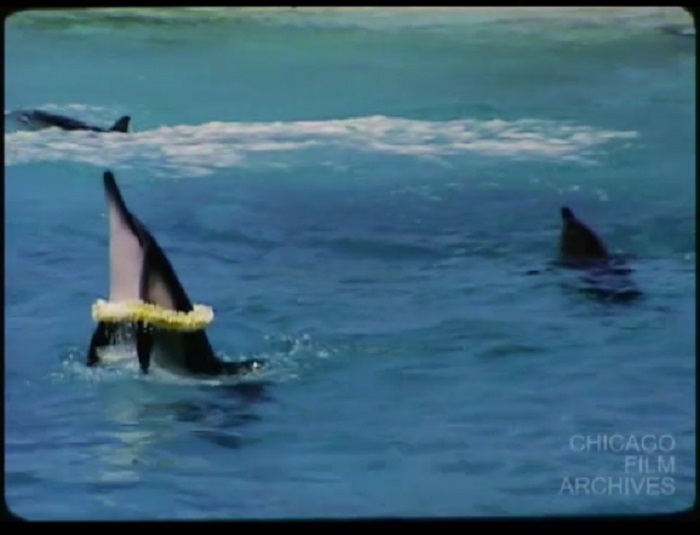 "2 part edited travel footage taken in numerous Hawaiian locations. Focuses on events and people as well as the natural scenery. Includes traditional dancing, a festival and a visit to an aquarium as well as religious locations." Chicago Film Archives.

This film is a part of the Julian Gromer Collection held by Chicago Film Archives.

"PART 1/1: 00:00 - Titles: Produced by Julian Gromer, Hawaiian Paradise. A tree lined road seen through the car windshield. Docked Matson Line cruise ship, people boarding. TS from the ship; view of Alcatraz, the ship’s wake. Arriving in Honolulu, view from ship’s deck including a smaller passenger boat. Var. smiling women receiving leis on deck, young couples together, CU of children. HA of boys swimming and diving for things thrown into the water. 06:27 - On the street, people approach and give leis to a woman and the cameraman. ELS PAN of coast. Views of the town, var. streets and buildings. Sign depicting the distance to other major cities. CU of two boy, with an ECU on teeth and eyes. 09:47 - Landscape with mountains in distance and var. residences. Var. trees, some with fruit or flowers: palm, banyan, banana. 13:40 - Makiki Church; var. MS of exterior details and LS TILT UP. LaieTemple: var. view of temple and the cultivated grounds. Boys playing football in a dirt field, slow motion of a catch and kick. Boys swimming and diving into a river. Reverse motion of diving off the shore. 18:01 - Var. landscape of Pali; waterfall, sloping mountains, habor. Coast and city street on the big island. Car driving down a road lined with sugar cane. MCU man stripping cane with his teeth. Putting bunches on a sluice. Var. CU in a factory as cane is crushed and turned to pulp and liquid. 23:35 - ELS of a green valley. Men uprooting and replanting lotus leaves in MS. Man making and eating poi at a luau, MS and CU. Var. ELS of landscape around a lava flow, with MS and CU on hardened formations. 28:15 - LS of a shoreline and MS of crashing waves. Harvesting coffee in LS with CU of picking the fruit. PAN of large crater at Hawaii National Park, MS and CU of steaming volcanic field and fissures. CU of var. flowers. Var. LS at the shores of a black sand beach, MCU of waves crashing. Men net fishing from the shore in LS and MS. 33:44 - Fish in a small yellowish tank, groups and individual fish. CU on a hand holding coral over a blue backdrop. ELS at cloud level at Haleakala Crater in Maui, clouds rolling among mountain tops. CU of flowers growing out of the rocks. Fast motion as sun sets. Var. LS of green valley landscape in Iao Valley. 38:40 - Harvesting rows of pineapples in a field in Oahu. Water tower painted as a pineapple, MCU of a female Dole representative smiling. Nightlife in Waikiki; CU of var. neon signs and cars. Scenes at the coast; waves in Waimalano crashing along a rocky coast in var. MS, a calmer shoreline with mountains in background. ELS of deep blue ocean with rocky outcropping, lighthouse, CU of many var. flowers. 45:22-50:09 - Women selling long strands of leis on the sidewalk in MS. Departing Hawaii; docked ship, LS people boarding, saying goodbye with more leis, passengers at the railing with streamers, LS of cruise ship leaving shore and on the ocean. MS of a lei floating in the water and sunset from the deck.......PART 2/2: 00:15 - Title: Hawaiian Paradise. People boarding a plane followed by aeriel footage of land and clouds. Kalipaki beach by Kauai Surf hotel. Var. locations in and around the hotel; waterlilies, PAN of the pool, CU of the cuisine. People playing in the waves on small boards. Men row to shore at dusk and light torches on the beach in MLS. 05:08 - Var. CU and MS of waves crashing and flowing between rocks at a shore. In Waimea an ELS PAN of the hills and valleys by the water. At a NASA station, brief footage of a small radar. Scenery in Wailua, including a waterfall and an ELS of a river boat. Tourists on a walk in Wailua River State Park. 08:18 - Var. shots of grand scenery in Hanalei, empty of people. Beautiful ELS PAN of a large swath of land. Interspersed briefly with var. birds and a CU of a woman grinding food with a pestle. 10:56 - In Honolulu. A woman making and selling leis by a roadside stand. Var. scenes of tourists, people at the railing of a cruise ship, MS RA of hula dancer. The crowd outside a Kawaiahao church after a ceremony. Laie Hawaii Temple, an unidentified church and a Buddhist temple- exteriors and interiors. 14:22 - Tourists looking at an art display, with a CU on some paintings and a man painting. The crowds at a Lei Day Celebration, CU on individuals and the leis on display. Children sing and dance on a vast lawn in LS and MS. 17:05 - Planting and harvesting pineapples at a Dole plant as well as preparing the fruit on a factory assembly line. Footage covers the process extensively in MS and CU and ends with a Dole representative happily tasting the finished product. 20:52 - Aeriel view of an airstrip and TS on the tarmac of Hickam Air Force base. A shuttle to the Arizona Memorial, TS from the boat. Inside the memorial, an American flag and the sunken decks. PAN of var. landscapes, natural and city. TS of a graveyard and WWI tombstone. Passers by among an unidentified building. 24:42 - An indoor performance in MLS and CU. Includes dancing, mock fighting and tinikling. People at an overlook area with ELS PAN of the green land. Scenes at a beach in Hukilau; small boats, a group of people pulling ropes and nets in from the ocean. 28:43 - Footage at an aquarium. ES outside with tourists and view of the layout, underwater view of fish, feeding a sea turtle, an area with dolphins as they entertain spectators. 32:16-36:22 - Var. views of waves crashing on a beach. A man swimming in the waves, getting lost in the foam. A montage of short takes, includes previously seen footage interspersed with CU of flowers and sunset scenes." Via Chicago Film Archives.