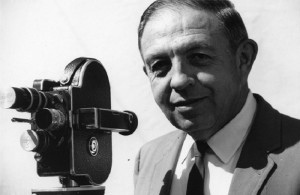 Butterfly with Four Birthdays, The (1965)

From National City, California. "By the time he completed his four-part magnum opus, The Sid Saga (1985-2003), Sid Laverents had attained superstar status on the amateur filmmaking scene. Born Sidney Nicklas Laverents in 1908, his real estate speculator father had dragged the family back and forth across the nation in search of the next land boom, resulting in a picaresque education and an appreciably eclectic sensibility. Already a student of piano and drums, Laverents taught himself banjo, ukulele, and harmonica and supported himself during the Depression as a one-man band on the vaudeville circuit. Married for the second time and settled in San Diego before World War II, Laverents worked for the Consolidated Aircraft Corporation from 1941 until 1967 (apart from a stretch in the military, repairing planes in India for the United States Army). In 1956, he bought a 16mm Bolex camera to film his parents' fiftieth wedding anniversary and two years later joined the San Diego Amateur Movie Makers Club. With exquisite patience, Laverents progressed from filming travelogues and garden snails to manipulating image and sound via sophisticated in-camera editing techniques. Prepared for exhibition at his film club, Laverents' 9-minute Multiple SIDosis (1970), in which the filmmaker performs Felix Arndt's 1916 ragtime instrumental "Nola" on uke, ocarina, Jew's harp and other instruments, all depicted via multiple exposures (from two to ten), became a staple of film rental outfits and was included in the National Film Registry in 2000, when Laverents was 92 years old." TCM.com