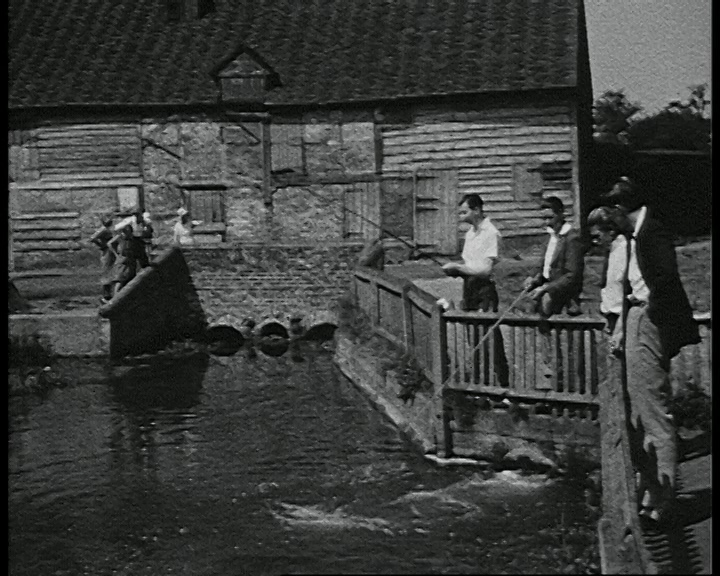 "Amersham and the surrounding countryside in different seasons." (EAFA database)

"Twenty short film sequences recording scenes in Amersham and the surrounding countryside, including shots of animals or agricultural work on local farms at Coldmoreham, Mantle’s Green, Hawridge, Risboro, Road Farm, Great Missenden and Hotley Bottom Farm. The sequences in Amersham comprise cattle being driven along Amersham Broadway; pedestrians walking through the Market Hall and by St Mary’s Church and the River Misbourne. Notable shots include: Amersham Broadway, Market Hall in the distance and possibly Church Alley [demolished 1939]. The sequences on local farms include shots of geese walking in unison in a field at Coldmoreham; cattle and pigs drink from a stream at Mantle’s Green; after milking cattle and goats return to pasture at Mantle’s Green; cattle and goats graze in the evening sun near Shardeloes; cattle graze at Kennels Farm; the harvest is completed at Hotley Bottom Farm; lambs frolic while sheep feed at lambing time; farm workers are observed at Hawridge and a farm worker finishes milking at Road Farm, Great Missenden; sheep graze on Pink Hill near Risboro in summer. A number of sequences feature Eunice Alliott and her pet chow, including as she walks her dog in snow covered countryside by the railway line and in local woods; the chow is filmed in Shardeloes Park; the chow plays in the snow; Eunice is filmed with a lamb; Eunice tries to feed stoats at Road Farm, Great Missenden; Eunice walks her dog and sets out a picnic at Longdown; Eunice and chow walk in woods in November sun. Other scenes comprise: men fish and children play in the water at the Old Mill; a boy swings on a gate and plays with a puppy at Road Farm, Great Missenden; three scouts clean pots and pans at a scout camp in Abbey Park, near Great Missenden; boys and youths make preparations for November 5 at Hyde Heath; the bonfire." (EAFA Database)