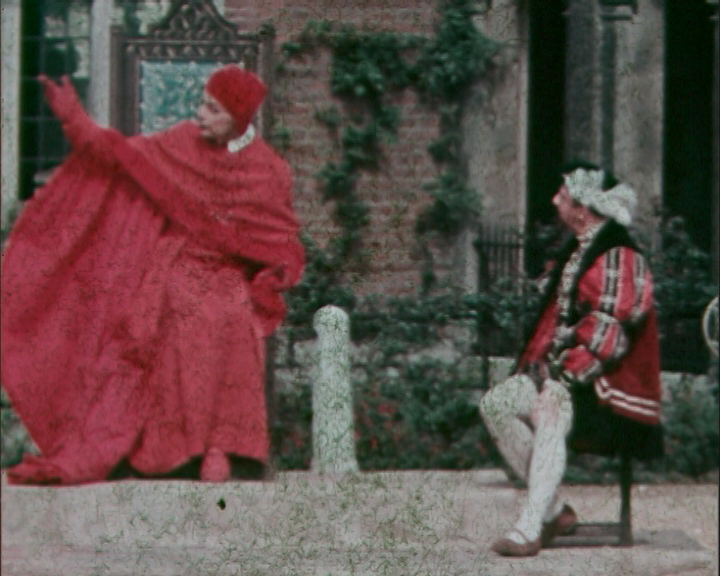 Still from Summer Wanderings In Norfolk via EAFA

A film that features various scenes and activities during the summer in Norfolk.

"The film begins on the Broads. An unidentified windmill is featured on the Broads scenes along with shots of wherries and sailing and motor cruisers. There are shots of wherries filmed across the reeds. There are also shots of fields showing marshland plants. The film turns to the agricultural nature of Norfolk and shows a quiet Norfolk lane, fields in the background and poppies growing in the verges and hedgerows. A woman is picking poppies and a bicycle passes in the distance. At Castle Acre Priory there are shots of the ruins. The scene changes to Blickling Hall where a group in Tudor costume act out 'The Masque of Anne Boleyn' in the courtyard of Blickling Hall. Turning attention back to modern Norfolk, the film demonstrates implicitly the concerns of the country, showing a long shot of Weybourne anti-aircraft camp, and then an aerodrome. This may be RAF Bircham Newton. Planes are seen outside the hangers and in flight. These are believed to be Handley Page Heyfords. There are shots of the village featuring the duck pond at Boughton. At Blakeney, the cameraman takes a boat out of the harbour to the bird sanctuary at Blakeney Point. As the boat leaves the creek, there are shots back to the shore, showing the village and church and shots of the spit as the boat approaches. On the spit, many birds' nests are filmed and some baby Oyster-catchers. The boat returns to Blakeney. The final scenes are from Cromer. A crab boat is filmed on the beach with the Pier in the background. The fishermen, one of whom was Jack Davies, show some of the crabs they have caught and bring their catch onto the shore. Henry Blogg, the coxswain of the lifeboat and Jack Davies' step-brother, features. The last shot of the film is of the lifeboat at sea with a tanker in the foreground." (EAFA Database)