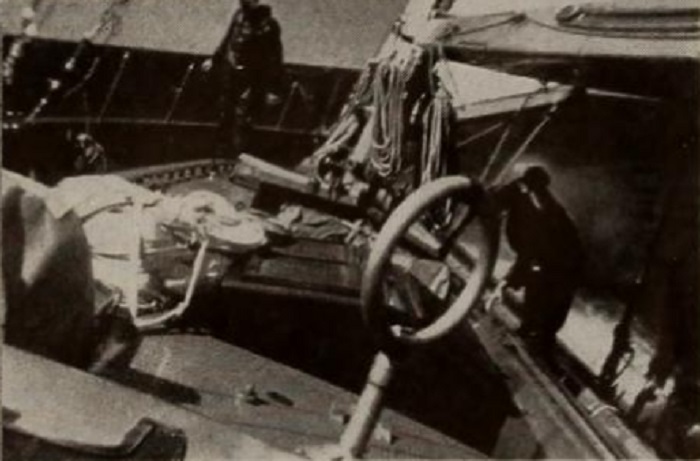 "Lovers of boats and devotees of movie making alike will probably never see enough of Rochester Race, produced by Walter F. Chappelle jr. in the summer of 1952. For this picture is one of the most complete and authentic records of big-league yacht racing that has been produced to date. For big league indeed was the 72 foot yawl Escapade, owned by Wendell Anderson of the Detroit Yacht Club and sailing as scratch boat in the Rochester point-to-point race westward to Hamilton, Ont., eastward to Stony Point Light, and then back to the Rochester inlet. And big league too was Mr. Chappelle's detailed coverage of this grind, as the proud beauty — with a crew of fourteen and 2630 square feet of working sail area — barreled through heavy seas, slatted and drifted in the calms — but came home by 38 seconds the winner. Working under difficult (and often dangerous) conditions, the producer nevertheless achieved a variety and quality of scenes which are amazing. His handling of side or back lighting, as a big Genoa or spinnaker jib arched out from the Escapade, creates many moments of breath-taking beauty. With Rochester Race Mr. Chappelle has proved beyond the cavil of superstitious yachtsmen that a fine movie may be made on a fine racing craft — and yet still win the race." Movie Makers, Dec. 1953, 332-333.