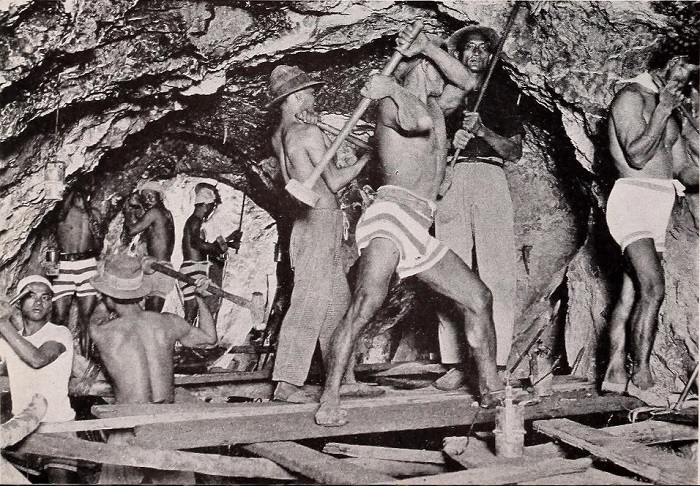 "An outstanding example of industrial record filming is Mining Chrome Ore in New Caledonia, by Enoch Perkins, ACL. Probably no amateur film ever was made under more unfavorable conditions and with as little opportunity to secure special equipment to meet them. Yet the photographic quality of this film is very high and it stands as a tribute to Mr. Perkins's ability to overcome obstacles. A large part of the picture was made in a mine where the atmosphere was so charged with moisture that it was necessary to stop and wipe the lens dry every few minutes. Although lighting was a tremendous task and often cables over a thousand feet long were required, the mine scenes are accurately exposed and well photographed. The picture gives a complete record of mining ore from the solid wall of the tunnels to the loaded freighter. It was filmed from an engineer's point of view and for the specific purpose of record; however, smooth continuity and editing maintain audience interest." Movie Makers, Dec. 1933, 500, 522.

"After nearly two years of work, which included fourteen months spent below ground at high humidity and temperature, Enoch Perkins, ACL, has successfully completed a five reel, 16mm. film of mining chrome ore in New Caledonia. As manager of mines in this little South Pacific island, Mr. Perkins combined mining with movie making to bring back to his firm in New York City — the Mutual Chemical Company of America — a detailed record of operations. In the film he has presented the driving of drifts, stope development and preparation, actual stoping operations, tramming, hoisting, sampling, loading lighters and, finally, the transfer of ore to the steamer. Having a high estimation of the film's motion picture qualities, the League staff was interested to note a recent discussion of it from the engineering point of view in Mining and Metallurgy, monthly journal of the American Institute of Mining and Metallurgical Engineers. "A more vivid presentation of the mining details," wrote the secretary of the Boston section, where the film had been screened, "could hardly be obtained even by a visit to the mines." Mr. Perkins is now making preparations for a series of films of his company's plants, the world's largest manufacturers of chrome chemicals." Movie Makers, Aug. 1933, 332.