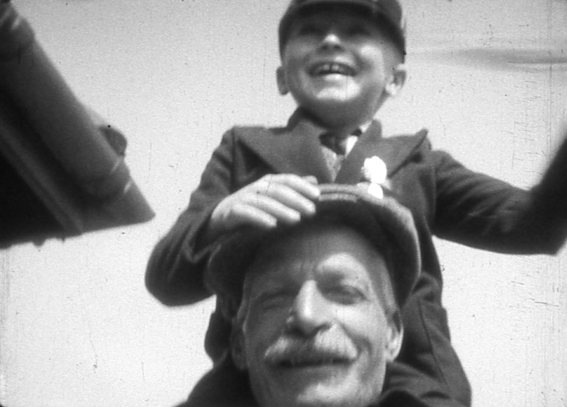 "Made by local amateur filmmaker Charles Scott, the film documents civic and public life in Norwich leading up to World War II and immediately following its conclusion. Beginning in 1933, Scott records acrobats, tightrope walkers and trapeze artists at the Norwich Carnival. The 1933 Armistice Parade features soldiers marching through the streets, halting at the eleventh hour. In 1934, Scott shows the Lord Mayor's Sunday celebrations at the Cathedral, as well as highlights from that year's Carnival. In 1935, Norwich celebrates the silver jubilee of King George V with decorations, parades, a military salute and an air display. January 1936 sees Norwich City Football Club taking on Chelsea in an FA Cup match at the newly built Carrow Road Stadium, with Scott capturing some of the action from his position behind the goal at the River End. Later that year, Scott returns to the Norwich Carnival once again, this time to catch an appearance by Hollywood starlet June Clyde. Norwich celebrates the coronation of King George VI with an extravagant street procession in May 1937. In 1938, with Britain gearing up for war, the Air Raid Precautions team practise fire-fighting and rescues, and test a new extension ladder. Following a break for wartime service, Scott returns to his film in 1946, documenting Battle of Britain Week by visiting the graves of servicemen and recording celebrations and parades in Norwich. Scott's film concludes with a visit to the home of prize-winning model engineer W.F.A. Way, who demonstrates some of his models on his garden track" (EAFA Database).