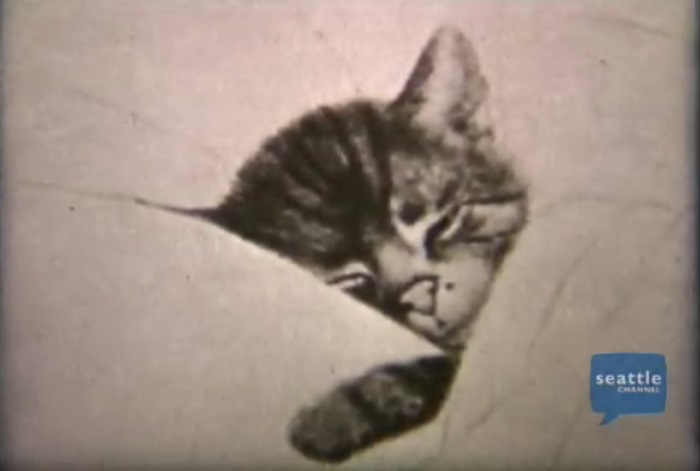 Still image from The House That Cats Built via Seattle Channel.

"The 1938 Seattle film, shot by Iwao Matsushita, features chubby cats playing, eating, and being cuddled by their humans." K5 News.

The film, and its status as an early "cat video," is discussed in "Seattle's love of cats and dogs goes way back according to MOHAI exhibit," King 5 News, March 6, 2018.

The film was featured in the Seattle Channel's "History in Motion" series in 2007.

This film is a part of the Iwao Matsushita Films collection held by the University of Washington Libraries.

"The Matsushita's house. Iwao walks out of the house. Hanaye Matsushita holding cats up for the camera. Ceramic cat statues on a mantle. Cats in the backyard, playing, eating from a bowl, playing with sticks. Felix the Cat cartoon of Felix stealing fish. Cat sitting in a window, yawning, licking its paw. Footage of the garden, the house, chickens, and cats. Cat in the yard, playing in a paper bag and in a rug. Drawings of cats. Cats playing in a window with a toy mouse. Cats outside, playing in a rug, with chickens. Cat in a basket, sleeping. Drawing of a cat sleeping. Iwao yawning." Via the University of Washington Libraries.