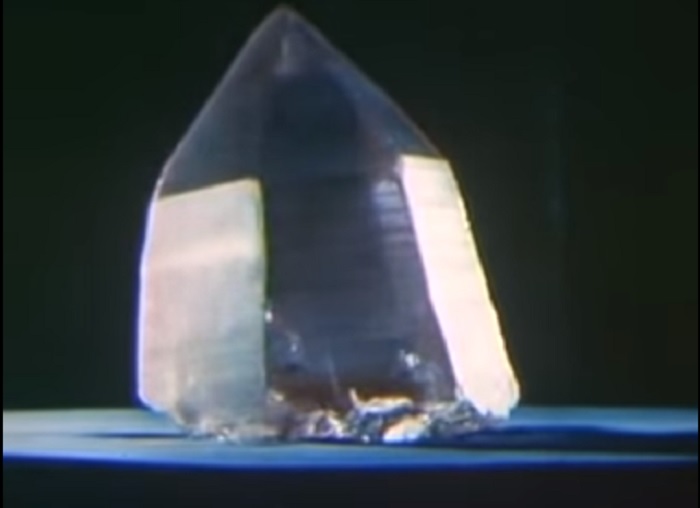 "Crystals While You Wait is a record of the triumphant climax of long scientific research for a crystal substitute. Desperately needed as a filter in expanding telephone transmission lines, the final perfection of this synthetic crystal could not have been more exciting electronically than is this study of it esthetically. To it, Joseph J. Harley has brought creative imagination, absolute accuracy and a rich sense of this drama in a laboratory. Ethylene diamine tartrate (known to electrical engineers as E.D.T.) is the hero of this scientific saga. And a colorful one it is in this record of its synthesis into electrically usable crystalline form. From its provocative lead title assembly — double exposed on a dynamic pattern of back lighted crystals — through its smoothly integrated sequences of laboratory procedures, to its triumphant and stirring climax, Crystals While You Wait is a moving marriage of science and cinematics." Movie Makers, Dec. 1948, 475.

This film's original title was Crystals While You Wait. It was transferred to 35mm technicolor in 1950 and distributed as Crystal Clear. Movie Makers (April 1950, 153) reported that the film was "given 4000 theatrical screenings before 1,250,000 in the United States and abroad."

The film is held by AT&T Archives and History Center. A copy is also held by the UCLA Film & Television Archive.

"The growth of the crystals is shown step-by-step, beginning with seeds and finally ending with large, crystal clear bars. The crystals are shown growing in a solution of EDT (ethylene diamene tartrate), and the final crystals grown are 6 inches long by 3.5 inches wide." AT&T Archives.