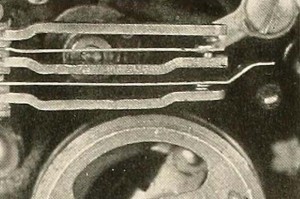 "To produce a clear explanation of just how the modern dial telephone works is a task that would tax any movie maker's ability, or even the united capabilities of any two filmers. Yet, when Kenneth Bloomer and Robert Orr. jr., pooled their movie making and telephone engineering knowledge to make Behind the Dial, they produced one of the most competent technical films that Movie Makers staff has ever seen. Clear, flawless photography, combined with a script that was worked out with infinite care, makes the story interesting and complete. Particularly effective are the sequences of the operation of the automatic machinery of the dial systems, in which shots of the encased mechanisms dissolve into scenes of the same mechanisms after the cases have been removed. The camera achieves the effect of an X-ray in revealing what actually happens within a maze of machinery to make the dial system possible. The film represents a tremendous amount of labor and planning, for much of the equipment shown had to be filmed at the telephone office late at night when the traffic was very light. This is a documentary film of both educational and entertainment value." Movie Makers, Dec. 1937, 628-629. 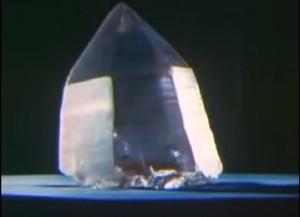 "Crystals While You Wait is a record of the triumphant climax of long scientific research for a crystal substitute. Desperately needed as a filter in expanding telephone transmission lines, the final perfection of this synthetic crystal could not have been more exciting electronically than is this study of it esthetically. To it, Joseph J. Harley has brought creative imagination, absolute accuracy and a rich sense of this drama in a laboratory. Ethylene diamine tartrate (known to electrical engineers as E.D.T.) is the hero of this scientific saga. And a colorful one it is in this record of its synthesis into electrically usable crystalline form. From its provocative lead title assembly — double exposed on a dynamic pattern of back lighted crystals — through its smoothly integrated sequences of laboratory procedures, to its triumphant and stirring climax, Crystals While You Wait is a moving marriage of science and cinematics." Movie Makers, Dec. 1948, 475.

"In the Window is a sort of mystery film in which a girl is frightened by mysterious telephone calls and is constantly gazed on through her window by a man with a pair of binoculars" PSA Journal, Aug. 1967, 37.