Film Record: An Apple a Day 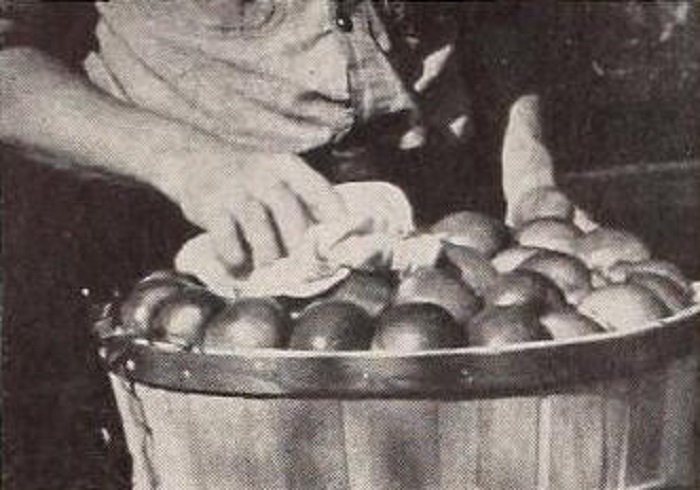 "In An Apple a Day, F. Radford Crawley has epitomized, in color, the story of a Canadian apple orchard. He shows, in perfectly exposed Kodachrome scenes, how the trees are grafted and pruned, how the orchard is mulched with straw and how the trees are sprayed. He shows the apple pickers at work in attractively chosen angle shots and, without interrupting the flow of action, he introduces the different varieties of apples grown in Canada. Horse drawn carts carry the apples to the packers, and there follows a tightly edited sequence of the ring pack method, culminating in a brilliant closeup of the top of an open basket of apples. In an epilogue, the basket is opened in a home, and children bob for apples at a Halloween party. Ingeniously managed upward angles show the children's faces bobbing for apples floating in the water above the camera. (The method of producing these shots was described in The month of plenty, by Mr. Crawley in the October, 1938, Movie Makers. The execution of the plan is perfect in the film.) Brilliant close shots of beautifully colored fruit stud this film like jewels, and especially satisfying are the subtitles, made by double exposing white lettering on a scene of an arched branch of an apple tree, filmed against a dark, late afternoon sky." Movie Makers, Dec. 1939, 634.

Library and Archives of Canada record.

"An Apple a Day, health slogan, is the title of a 450 foot, 16mm., color film produced by F.R. Crawley, ACL, for the Rideau Fruit Farms, Manotick, Ontario. Following a continuity of seasonal activities, the production commences with winter pruning, records spring planting and fertilizing, the summer spraying and thinning and concludes with picking and packing after the harvest. The purpose of the film is to portray the accomplishments in apple culture, to advertise the product and to educate other fruit growers regarding the proper methods of apple husbandry" ("Practical Films," Movie Makers, Jan 1939, 47).

See also the entry for this film on CESIF.

An Apple A Day was distributed by the Gutholn film library, New York; Educational Screen, Jan. 1940, 31.

"An overview of the apple-growing industry, with reference to Lobo, Joyce, Melba and McIntosh varieties. The film follows the process from planting through pruning, grafting, growing care, picking and packing the apples." Library and Archives Canada.