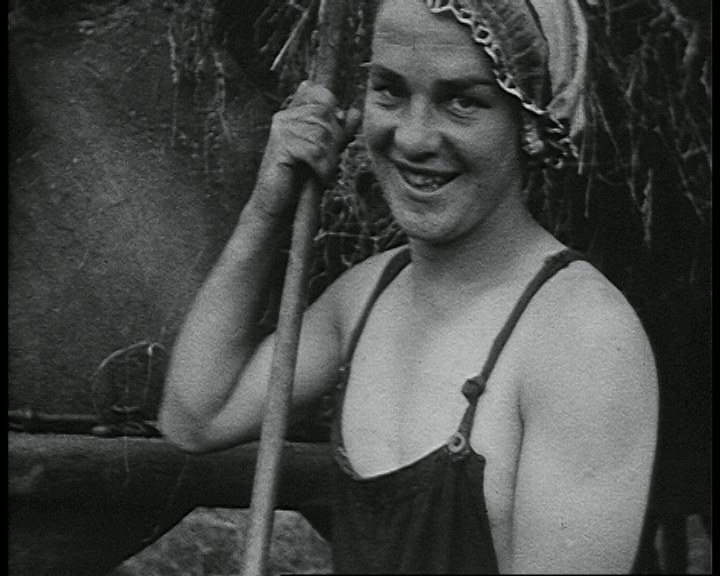 Still image from Abroad in Wales via EAFA.

"Film record of a journey from the Cotswolds in central England to South West Wales and northwards through Wales, comprising shots of local beauty spots, visitor attractions and the activities of locals." (EAFA Database)

"Reel 1 includes a sequence recording details of the journey to Wales through Oxfordshire and the Cotswolds. Footage in this sequence includes Eunice Alliott inspecting the Rollright stones at Chipping Norton; Eunice at The Broadway hotel; beauty spots and historic buildings in Evesham, Great Malvern and Tewkesbury. The English sequence concludes with a shot of Eunice driving the Alliotts' car over Wilton Bridge. Shots include: Eunice getting out of the Alliotts' car at The Broadway Hotel; Eunice in the garden at the hotel; Eunice drinking tea by an open fire, Eunice ascending the stairs and a shot of the Alliotts' room, including its four poster bed. Shots of the journey through the Cotswolds in England on reel 1 also include the river Avon and swans at Evesham; exterior of Great Malvern priory and stained glass window; exterior and interior shots Tewkesbury Abbey. Reel 1 also includes footage of the Welsh landscape, coast and activities near and in Tenby. It records visits to the beach at Saundersfoot; to Tenby, Manorbier Bay, Carningle and the Henllan Falls. Shots include: children playing on the beach at Saundersfoot; pan shots of the coast, the landscape, the town, beach and harbour at Tenby; the exterior of Tenby Castle; the cliffs and coastline near the Stack Rocks; Eunice inspecting rocks at the Cromlech; a girl picking primroses, men with ponies and carts hauling sand; the exterior and interior of Manorbier Castle; Eustace Alliott scanning the Prescelly Hills, Dinas Head and Fishguard Bay with a pair of binoculars; waterfalls and rapids at the Henllan Falls. Reel 2 includes footage of the activities of locals and the landscape along the River Teifi and Cardigan Bay. It includes shots of the River Teifi and the bridge at Cenarth; Eunice Alliott climbing a bank near Cilgerran Castle; the exterior of the castle; views of the castle from the riverbank; a view of Gwbert from Cardigan Golf Course; the activities of fishermen on the Teifi Estuary; the coastline beyond Gwbert; sights from a boat trip around Cardigan Island; Eustace Alliott using binoculars to observe the coast and seals at sea off the Gwbert; harvest scenes; a visit to a farm. Shots of the Teifi at Cenarth include: anglers on the river bank, close to fast flowing water [...] Shots at Cardigan Golf Course include: a player teeing off with Cardigan Bay in the background [...] Shots of the activities of fishermen at the Teifi Estuary include: men driving horse drawn carts along sand dunes and through narrow channels of water; men in boats; men arranging nets; men hauling a boat; a boat leasing its seine net while a man hauls the net on the opposite bank; the boat arrives on shore and its occupants haul the net to form a circle, the net is hauled to land with its small catch, one of the men washes the salmon while two others attend to the boat. Shots of the coast at Gwbert and the boat trip around Cardigan Island include: Oystercatches on a rock and birds in flight; birds on the island and on the sea; Eunice observing the scenery from the boat. Shots in the farmyard include: Eunice feeding chickens and ducks; pigs rubbing their skin against walls and pigs in a sty. Reel 3 records details of the Alliotts' trip along the west coast and through central Wales. The reel includes shots of men, women and children hauling a small sailing boat up the beach at Traeth; Eunice Alliott climbing a rock and looking at the coastal scenery; a waterfall at presumably Traeth; Eunice feeding a seagull; waves breaking against rocks and cliffs where the ‘Tudor Valley’ meets the sea; children playing along the harbour wall at New Quay; the Devil’s Bridge and the waterfalls at Mynach with two shots of Eunice walking through and observing the countryside; Eunice bathing her foot and rinsing her face and hands in a stream before climbing a bank to sit and pour a drink from a soda syphon; the Craig Goch dam with shots of Eunice observing the scenery. Reel 4 records details of a journey through Snowdonia. It includes shots of cattle on a beach at Aberdovey; shepherds corralling sheep on a road near Tal y Llyn to allow a car to pass; mountain landscapes at Cadair Idris, Dolgellau and Blaenau Ffestiniog; a man cutting grass with a scythe; [distant shot of] Snowdon; the Conway and Llugwy rivers and waterfalls; of the bridges at the Menai Straits; inland lakes (Llyn Ogwen and Llyn Gwynant) and Snowdon; agricultural workers harvesting and cutting grass in the Vale of Gwynant; Eustace Alliott using binoculars to observe Snowdon. The shots of the Menai Straits includes actuality footage of a car journey across the bridge" (EAFA Database).