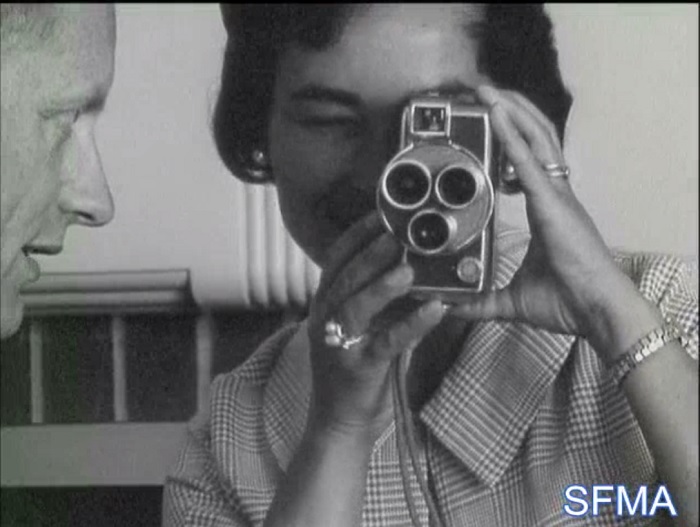 "Welcome San Francisco Movie Makers opens with a montage of classic San Francisco sights, setting the backdrop for the first meeting of the San Francisco Movie Makers Club. After an introduction of the club’s members and its activities, filmmaker Dr. Frank S. Zach, along with his wife Helga, proceeds to demonstrate the proper use of 8mm and 16mm cameras and film sound recording techniques. Shot, scripted, edited, hand titled and over dubbed with music by Dr. Zach, this film seeks to encourage, teach, and recruit image makers." centerforhomemovies.org

The film was preserved by the San Francisco Media Archive.

" It begins with a nod to Hollywood—a shot of the Golden Gate Bridge inspired by Vertigo—followed by a quick series of panoramic views of the city. Having established the location, the film moves on to its central purpose—to introduce the club and explain the basics of amateur filmmaking.

The second half of Welcome San Francisco Movie Makers consists of a fairly detailed demonstration of the film hobbyist’s tools: camera, projector, and sound recording system. These carefully staged sequences reveal that the popularity of home moviemaking was partially due to its “gear-head” appeal. Magazines like Popular Science routinely featured articles—and advertisements—targeting the amateur filmmaker.

These how-to sequences also illustrate the personal angle of amateur filmmaking that made it attractive to so many. Accompanied by a music track, Dr. Zach’s wife Helga and her partner give a technical demonstration, not in a film lab but in the comfort of a living room, where they sneak glances with each other and the filmmaker Dr. Zach. Such intimacies break down the “fourth wall” typical of commercial narratives to create the feeling of a shared experience between audience and filmmaker." Via NFPF.