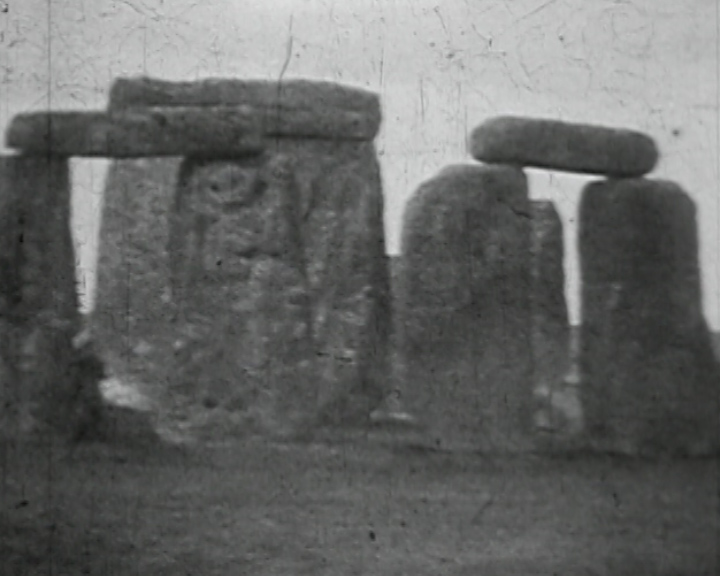 Still from Southward Bound via EAFA

"A journey from Norfolk - via Hampshire, Wiltshire and Somerset - to the village of Charmouth in Dorset. Having set out from Norfolk, the group speed down country lanes and gravel tracks to a farm in Hampshire where a tractor is used to cut and bind a hay crop. From Hampshire the group travel to Wiltshire and the site of 'Britain's oldest ruin', Stonehenge, before visiting the 14th century Nunney Castle in Somerset. In the cathedral city of Wells, the group visit take in views from the cathedral tower and its ornate Western Front, as well as the nearby Bishop's Palace. A visit to Cheddar Gorge - filmed from a moving car - and the Cheddar village is followed by an informative visit to Glastonbury Abbey, with views of the ruins, the Lady Chapel, the grave of King Arthur and the ongoing archaeological work. At the end of a long journey, the group arrive at their destination - Charmouth, Dorset - swimming at the beach and taking a tour which includes panoramic views of the village, a house where Charles II once slept, and picturesque shots of the River Char and Golden Cap, the highest point on the South Coast. The film concludes with 90 year old George Hodges - presumably a relative of the filmmaker - who is shown smoking a pipe and relaxing at his home before appearing at an official ceremony where he opens the playing fields which had been donated by his late brother Charles." (EAFA Database)