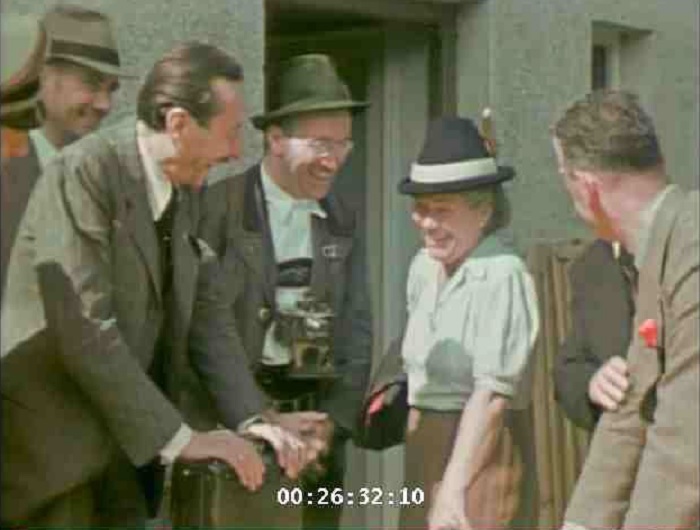 Still image from Outing of the Dachau Amateur Film Club, 1943.

This film is held by the United States Holocaust Memorial Museum.

"Title onscreen reads: "Auf Wiedersehn in Dachau, 1943" [Farewell in Dachau, 1943]. This outing was shot by a baker who supplied bread to Dachau concentration camp. See Stories 1282, 1283, and 1285 for related footage. Another title reads: "Der Ausflug des BDFA, 1943" [Outing of the amateur film club, 1943) Good color. Members of the club are shown gathered outside, talking and laughing. One of the men is a high-ranking uniformed SS officer who was also a member of the film club. The officer gives a Hitler salute to one of the women in the group. Members of the club stroll through the town of Dachau, filming the various attractions and each other. 00:27:24 a man in an SS uniform (?) rides a bike toward the camera. CU of one of the men in the club adjusting his camera. One of the men holds a still camera. The next scenes show the group on a country road. They film a fast-flowing river and stop at a restaurant to have lunch outside. A man plays an accordion. The SS officer is still among them. After lunch they lie on the grass and joke for the camera. More shots of the river.

00:36:55 Back at the restaurant, people sit at outdoor tables; in the background SS men play volleyball (they are not in uniform, but Michael Kuball at La Camera Stylo points out that men of this age would certainly otherwise be at the front in 1943 and concludes that they must be SS from Dachau). A man holds out a stein of beer for a horse to drink. 00:37:37 Another uniformed SS officer is visible. The members of the film club walk through tall grass and down a path by the river. The SS officer waves at the camera. They cross a bridge and film along the river. A man passes by with a horse-drawn wagon full of hay, followed by the SS officer and another uniformed man in an open-roofed car. A guard tower from the concentration camp is visible in the distance, behind a large meadow and some trees. The officer's car passes through a gate and disappears down a country road, presumably returning to the camp. "Ende" title on screen," via the United States Holocaust Memorial Museum.