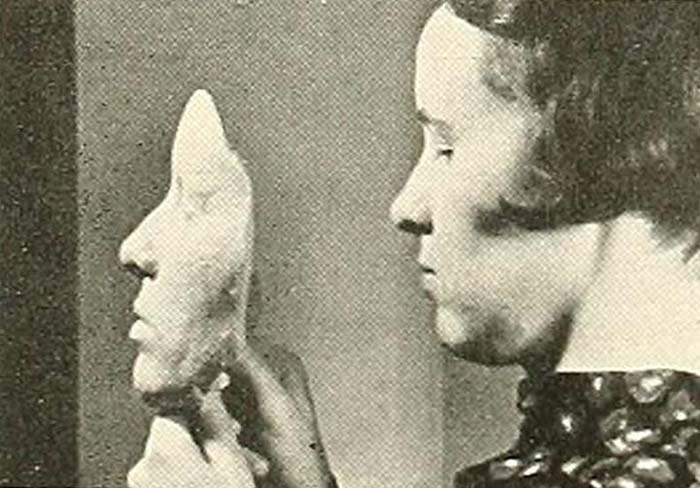 "In Moulage For Masks, filmed for Dr. G. A. Peterson, Dr. James E. Bliss presents with satisfying clarity a step by step study of the procedure of producing the facial masks used to guide the operator in making dental restorations. A logical and carefully prepared script, added to finished camera work and exact editing, has created a color picture that gives an amazing amount of information in brief footage. It is a classroom film of notable competence, both because of the logicality of the cinematic thinking that it represents and because of the successful manner in which it always focuses audience attention on significant action. Carefully written titles integrate perfectly with the sequences, and the whole forms as compact a study as could be produced on this subject. At the same time, an eye for color composition and human interest has made the reel attractive from the layman's point of view." Movie Makers, Dec. 1937, 627.

"Good classroom film describing a method for the construction of facial casts by the use of a rubber like 'Moulage' for the impression. The photographic quality of the film is so good and the subject matter so interesting that the film is far above average. The color of course adds to its attractiveness. Film follows the instructor through the procedure of making a mask." Educational Film Catalog, 1939, 227.

Dr. Bliss discusses the film in "The Technique of Dental Filming" (Movie Makers, Oct. 1937, 488, 498). The article features frame enlargements from Moulage for Masks.