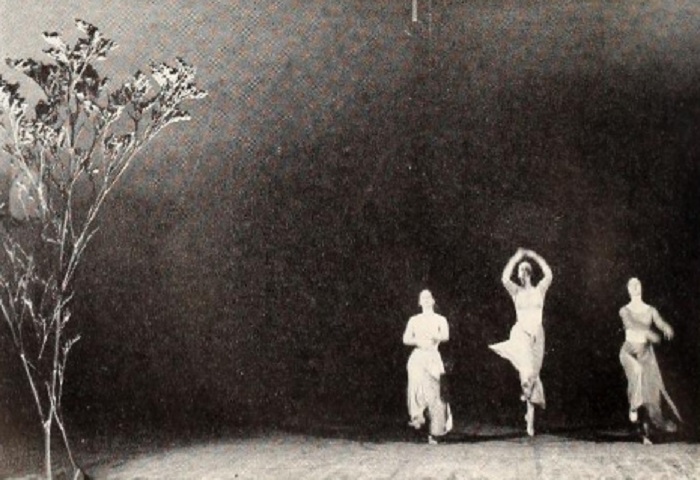 'In Fancy Free' is a fantasy, imaginatively planned, photographed, and edited, which pictures the day-dreams of a young woman as she sits by the window looking out on her garden. Nearby objects, such as a Buddah, a porcelain figure of a dancer, a flower, and the passing of friends by her house set her to reflecting on her greatest wish -to be a dancer. She becomes absorbed in these dreams as a participant and the dances she imagines are laid against colorful and symbolic backgrounds. As the picture unfolds, narration by a young woman with a remarkable appealing voice tells the story of the young girl's desires, and then in the closing sequence, we learn in a brief heart-tugging climax that the girl, a cripple, can never take part in the activities of her dreams. The production is replete with effect lighting and special photographic effects -a forte which Turner ably established in his earlier productions. The dance numbers demanded skill, both in direction and execution; and the musical score, especially prepared by members of the student orchestra of the college where Turner is an instructor, is a vital and moving contribution to the picture." American Cinematographer, May 1952, 222.

"Save for a few opening and closing scenes, In Fancy Free is creative film fantasy of the highest order. For in it Glen H. Turner, beginning only with an idea, has evoked from his own mind and heart and spirit a superb and moving visual drama. As with all truly great art, the theme of In Fancy Free is essentially simple. At the film's opening a grave and tranquil girl is seen seated by a sunny window overlooking a rose garden. Laying aside her book amid these halcyon surroundings, she daydreams to herself of that which in all her life means most — the joys of dancing. There follow then four sequences of modern ballet, their themes suggested by objects or activities around her — an Oriental figurine, a string of paper dolls, a tennis game and the sunny, nodding roses. As these ballets end, we learn — in a brief, throat-tightening climax — that never, in her lifetime, can the girl take part in them. Although thematically quite different, In Fancy Free is a direct descendant of One Summer Day, with which (on 8mm. film) Mr. Turner won the Maxim Memorial Award in 1949. For in both fantasies the producer has, with sound dramatic instinct, related his world of pulsing wonder directly with the world of poignant reality. Thus it is that Mr. Turner's brilliant creative imageries take on a meaning above and beyond their mere technical virtuosity. The story development, dance themes, abstract settings and, needless to say, the camera work of In Fancy Free are all original creations by the producer. Mr. Turner enjoyed, however, a wealth of heart-warming collaboration in bringing this picture to its full flowering. An assistant professor of art at Brigham Young University, he was able to enlist the enthusiasm of countless other creative spirits. Thus it was that an original and brilliant musical score was written directly into this film dream. Thus, too, that this music was performed for recording by the university orchestra and that the dance themes were developed, almost step by step with the picture's progress, by the college ballet group. There will be those among the carping who are sure to complain that with this cooperation and those resources any amateur could produce a winner. To these few our unequivocal answer is "Non-sense!" Great art is created by the mind and heart of the artist — not by the hands of those who help him. That Mr. Turner could integrate these efforts into his own filmic concept is only another measure of this man as a truly creative cine artist." Movie Makers, Dec. 1951, 392-393, 410.

Discussed by Turner in "Are Movies Art?" (Movie Makers, Jan. 1952, 9-11). The article describes Turner's background as an art instructor, and the film's conception and production. Turner thanks various production members, and production and film stills are shown.

The film received a "diplôme d'honneur" and bronze medal at the Cannes International Festival of Amateur Films in 1956 (The Daily Herald, from Provo, Utah, March 4, 1956, 15).

Dr. Leon Dallin's score and musical sketches for the film are a part of the Leon Dallin Collection held by the Sibley Music Library.