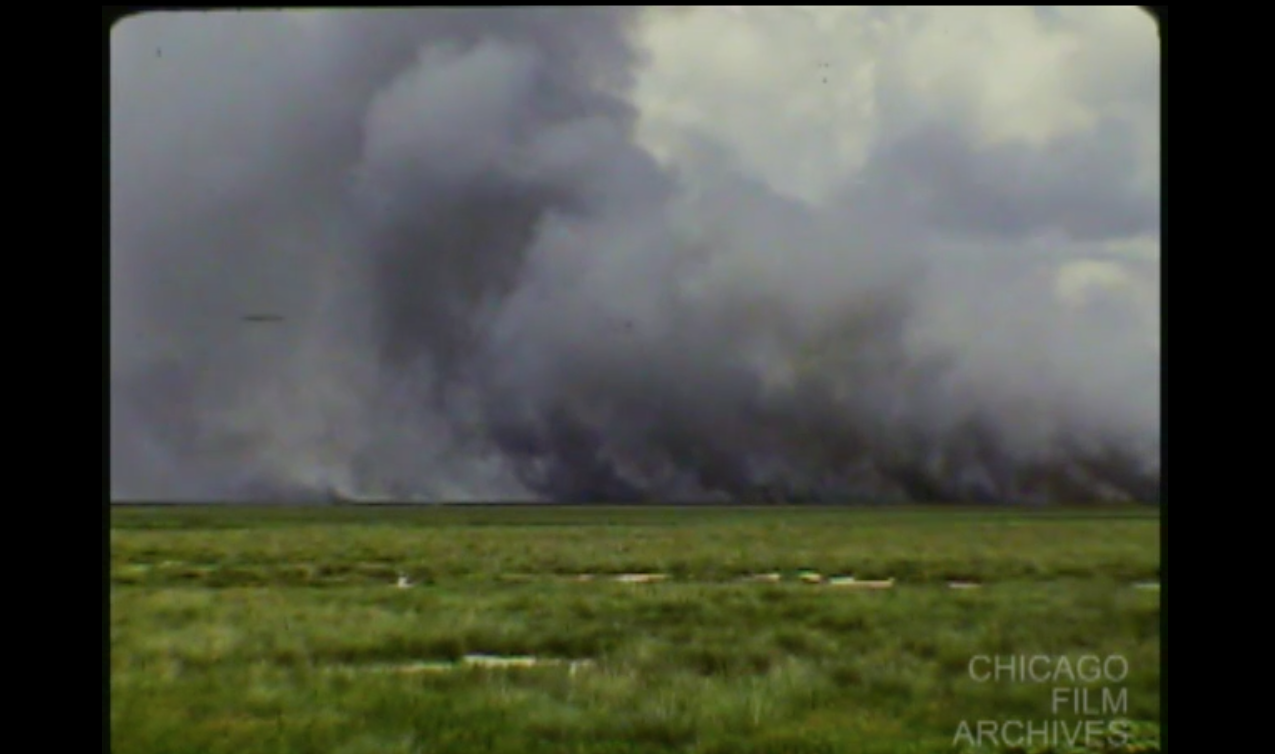 "2 part edited footage of a road trip along the Gulf Coast from Louisiana to the border of Mexico. Includes much natural scenery, often from a moving car, but also documents visits to the Tabasco factory and two ranches. A woman also evokes the Longfellow poem, Evangeline, by taking a wistful walk." Chicago Film Archives

"PART 2/2: 00:02 - ES Aerial footage over fields and trees. The nature of Avery Island. Native scenery of hanging moss and flowering trees is interspersed with CU on exotic flowers such as lotus, azaleas and camellias. Frequent PAN, TILT or ZOOM. Also includes wildlife such as lizards and herons. 05:28 - Salt mining; Aerial ES, factory and outdoor vats of water, PAN to follow water flowing. Conveyor belt of packaged salt, CU on the Sterling label. Making Tabasco sauce; LS and MS of harvesting in the pepper fields. Inside the factory the process is fully documented from the initial piles of peppers, through liquid aging in oak barrels and the mechanized assembly lines of bottling, labelling and packaging. MS and CU. Ends with a dramatization of a man putting the sauce on his burger and the plate bursting into flames. 12:10 - Camera follows a woman wearing period dress clothing as she walks through a landscape of flowering trees, sits under the Evangeline Oak and passes by a statue and cabins while reading the Longfellow poem. Two men eating halves of a giant watermelon at the roadside. 15:44 - Var. views. Birds in MS. TS from a boat. A long truss bridge over water. HA view of a ship on a river. ELS of factories with boats docked in the foreground. TS of the roadside and along a beach past stilted houses. 20:03 - Scenes from Galveston, Texas. Var. views of a shipyard. Loading crates onto a ship’s deck in LS. LA of flags waving transitions to var. beach scenes. Sunbathing, umbrellas along the shore, swimming. Cattle in the field of a ranch, men talking and looking at a map of Texas. Follows three women on horseback riding out into the fields among the cattle in MS, MLS. Solitary woman bottle feeding a fawn, MS and CU. CU of same woman in a cotton field followed by TS of men harvesting cotton. 26:20 - The shores and houses of Corpus Christi in TS. HA PAN of the city. Moored boats and caught fish in the harbor. Someone pretends to steal the car and a man chases him down the block. 28:22 - Var. flowering cactii and TS of roadside vegetation. The grounds of Santa Gertrudis Ranch, ZOOM in on the building. Two men inspect the car (a convertible) in MLS. CU of a rancher in cowboy hat by the car. Var. horses and cattle in a fenced pen. Nice LA shot of the wide Texas sky with barbed wire in the foreground. 32:55-35:00 - Var. footage on the road, crowds on the street in Brownsville, Texas. ELS of the city. On the bridge to Mexico. At a beach, fishing. Film ends without the usual ending title." Viewing notes by Chicago Film Archives