Film Record: Why Do Oysters Perspire? 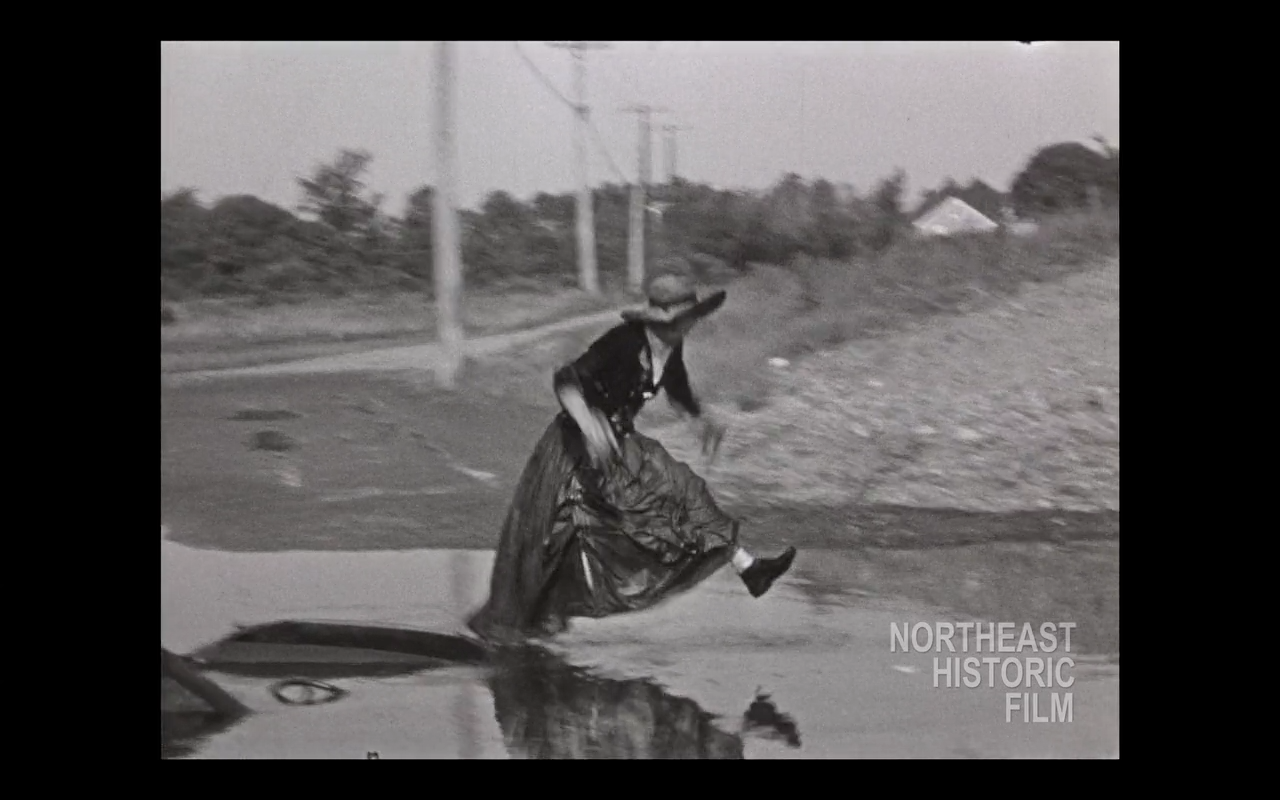 still from Why Do Oysters Perspire. Image from Northeast Historic Film

"Intertitle: "Magnificent "Bewdley-on-Baldwin", country seat of Madame Tiara Kohinoor, an eccentric opera singer." Aerial shots over estate country (this actually was the Crane estate in Ipswich, MA) on edge of ocean. Intertitle: "Madame Kohinoor, in her superb town-car, returns from a trip to her jewelers." A 1929 Minerva town car drives down road (a recent Shurcliff acquisition). The footman and chauffeur ride in the open part of the car, each wearing a hat. In the passenger seat, Alan Bemis as Madame Kohinoor, dripping with jewels, pulls pearls out of her bodice and shows them to Fifi, her maid. Madame puts them in a box on the seat. When the car stops, the footman opens the door and takes the dachshund dog, then helps Madame out, and Fifi exits. CU of the box left on the seat. Fifi comes back to kiss the chauffeur. Intertitle: "Madame has forgotten her jewels!" The chauffeur puts the pearls in his pocket. Intertitle: "Darling, let us fly from Bewdley! Happiness awaits us across the border!" The maid gets in the Minerva car, and they drive off. Madame and the footman (still with the dog) exit the house, waving for the robbers to come back. Expansive country is seen beyond, including a Dutch windmill. Intertitle: "Ernest, you must telephone the police while I give chase to these ingrates!" Madame runs off, fins a Model A convertible coupe in the drive and gives chase, although she is not a good driver, and goes on and off the road. Intertitle: "Again the great town car forces our heroine off the road--" The Minerva forces the Model A down a hill into a pond, where it quickly sinks. Madame flails, steps off the trunk of the car into deep water. More comic flailing, then she climbs up the hill to a bridge. Views of the sunk car. Intertitle: "The highly efficient motorized Bewdley police get into action." Two policemen and the footman run tow a garage (the Shurcliff garage, Ipswich, MA), and police back out in a car marked POLICE, then are crashed into by another POLICE car, and wild driving and shooting ensue between one open and one closed car. They try to stop the Minerva by holding a rope across the road. A roadblock of cars stops the Minerva, and they are pursued by the police, guns firing, etc. until they double back and escape in a 1930 Marmon sedan police car. The police lose a car door, have balloons coming out of the engine, etc. The two cars race along the road and push each other off at high speeds (shot from moving car in front of them). Intertitle: "A pair of highjackers in search of unfinished business." Two men in an open car, one with a gun, encouraging each other. They see Madame on the bridge and stop to "help". Intertitle: "Please help me recover my jewels!" Intertitle: "We'll recover them all right, but not for you, you queer old bag!" The two hijackers assault Madame and throw her down the hill toward the pond, and drive off. Madame struggles up, and runs up the road. Meanwhile, two police cars wind down a road, as another car approaches from behind. Intertitle: "Rev. C. Howie Jiggles, a snail of a motorist, accidently blocks the road in front of the remaining police car!" Giggles in his open car, with top hat and beard, barely moving, then blocking road in his Model A as a Marmon police car, driven by the robbers, comes at high speed into it. The robbers survive and steal yet another police car, an Auburn roadster. Rev. Jiggles shakes his fist at everyone, and they all run away. Interititle: "Leaving the hijackers alone in hot pursuit" Two cars pushing each other around on the road. The Police car goes through a pile of boxes, the robbers knock down a pole. Hijackers in pursuit. Intertitle: "The desperadoes flirt with death as they swing back straight into their pursuers." The open police car turns back and hits the Essex convertible head-on. The robbers get out, see the hijackers are knocked out,, then run off through a swampy field. Intertitle: "The end of reel one, leaves them all afoot but running hard." viewing notes via Northeast Historic Film