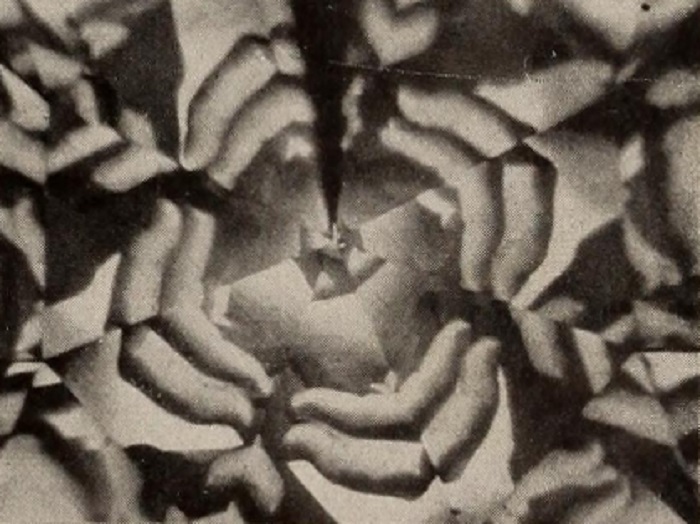 "Kaleidoscopio, by Dr. Roberto Machado, is a brilliant and provocative study in abstractions, filmed in its entirety through a kaleidoscope. Dr. Machado's cinematic extension tube, however, is quite obviously not the familiar small toy of one's childhood: in one sequence, delicate human fingers are deployed before the device, while in another a set of colored, kitchen measuring spoons do a gay dance in multiple. The lighting — which traditionally was transmitted only through the base — ranges from that type (through gleaming balls of crushed cellophane) to reflected illumination on an assortment of children's marbles. Billed by its producer as a "film musical," Kaleidoscopio is indeed instinct with strong rhythmic patterns and pulsations. The picture is an exciting and imaginative advance along the ever widening frontiers of personal motion pictures." Movie Makers, Dec. 1946, 471.

Discussed by Dr. Machado in "Adventure in Abstraction" (Movie Makers, May 1947, 195, 216-217). In the article, the filmmaker shares his interest in combining music with abstract film images. He also describes the kaleidoscope device that he used to film Kaleidoscopio.

This film may also be known as Caleidoscopio.