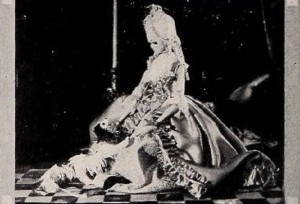 "In Traum Im Karneval, 1000 ft., 35mm., a distinctly new technique in cine puppet drama has been beautifully and conclusively demonstrated. Working with puppets free of distracting threads and controlled entirely from below the line of camera sight, Dr. Goldschmidt has brought to his film the fluidity and cinematic smoothness essential to a genuine photoplay. Gone are the proscenium arch and the unavoidably static feeling of photographed "theatre." Here the camera has moved freely from near shot to closeup or semicloseup as the action demands. Inserted scenes from real life, used with symbolism significant to the mood of the story, have served only to heighten the cinematic illusion, while the unusually graceful miming of the puppets amazes one with a feeling of uncanny and fantastic life. Traum Im Karneval is delicately conceived, sensitively directed and superbly photographed. Of brilliance equal to Dr. Goldschmidt's technique was the unfailing mastery of his collaborator, Richard Teschner, eminent European puppeteer." Movie Makers, Dec. 1931, 685.