"In Love Apples, Henry Hoke presented what is, so far as Movie Makers records show, the first approach to filming the hobby and preoccupation of an entire family. Unquestionably the Hoke family likes tomatoes and, something less commonly encountered, it is willing to work to produce them. Mr. Hoke's Kodachrome film lets us see the entire family group at work planting, weeding, watering and picking — especially picking, because Mr. Hoke makes quite a cinematic point of eager hands reaching for tomatoes in and out of season. The continuity is active and full of humorous touches, with a shade too great an emphasis on camera tricks for their own sake; the photography is adequate and often provides much screen beauty. Above all, this film has a unity which, added to its unusual motive, brings it into the Honorable Mention class." Movie Makers, Dec. 1936, 549-550. 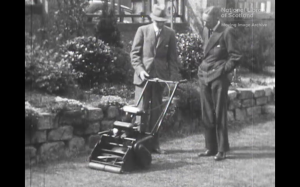 A story of a man who dreams of a rogue lawn motor coming to wreak havoc in his house. 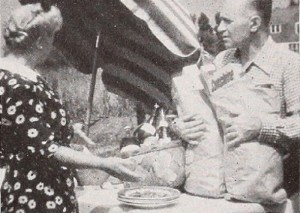 "George Mesaros, who has demonstrated his competence as a maker of good movies in other fields, turns to humor in this film comment on wartime conditions. The point of the story — for it is the foray and not the tale that is pointless — turns on providing for a picnic in the yard of the home. While the master of the house is shopping with ration points, the skeptical family gets, from the Victory garden, cooks and eats the alfresco feast, at the end of which Father — who really did find something in the shops — returns with loaded arms. First class Kodachrome pictures and a well knit continuity are used by Mr. Mesaros to bring to American audiences something of the spirit of easy and natural outdoor fun with food that for so long characterized the Europe of happy memory. Some of the scenes of cooking are so realistic that one almost reaches for what is shown on the screen." Movie Makers, Dec. 1943, 478.

"Garden shots, including time lapse shots of flowers opening, and a 1962 parade in Sidney or Victoria" British Columbia Archives.