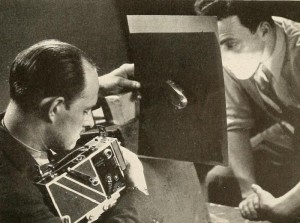 Common Mistakes and Their Correction (1939)

"Kenneth F. Space (1903-1971) worked as a commercial photographer in Binghamton, New York, from 1927 to 1929. From 1929 to 1931, he was employed by Agfa-Ansco, a manufacturer of cameras and photographic films. He photographed for the Harmon Foundation during the 1930's and early 1940's. In his later years, he worked for and retired from the International Business Machines Corporation" National Archives.

Space often contributed to "The Clinic" in Movie Makers, where he would give technical tips on filmmaking.

Kenneth F. Space is associated with various collections in the National Archives Catalog, notably including the Harmon Foundation Collection.