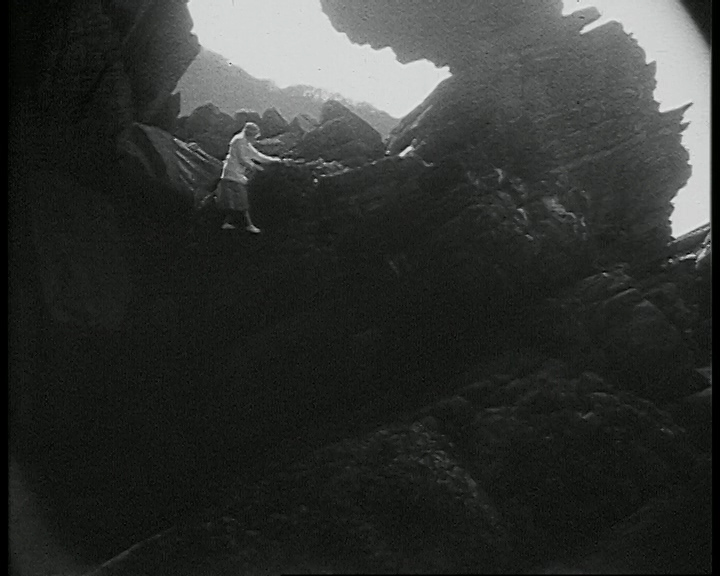 Still from Tour To North Devon via EAFA

"Film record of a visit to North Devon comprising shots of local beauty spots, visitor attractions and the activities of locals and tourists." (EAFA database)

"Film record of a visit to North Devon comprising shots of local beauty spots, visitor attractions and the activities of locals and tourists. Shots on reel 1 include: hand pulled rickshaws waiting for customers outside the Grand Pump Room in Bath, Eunice Alliott and other groups of tourists inspecting the interiors of the King’s Bath and Great Roman Bath; a quiet street near the Old Yarn Market, Dunster; the harbour and river at Lynmouth, notably houses next to the River Lynn and its old bridge; views of Lee Abbey and its grounds, notably two shots of shadows cast by trees on footpaths; Eunice Alliott clambering over a rock formation at Lee Bay, children and adults on the beach and bathing in the sea; views of and from Duty Point and the surrounding coastline, including shots of goats roaming on the cliffs; other recreation, a tennis match and adults taking refreshment (possibly in the grounds of Lee Abbey), a group of adults dressed in evening wear watching the sun set over Lee Bay."
"Shots on reel 2 include: horse riding on Exmoor and, in particular, a group of riders on an excursion in the rain to the Doone Valley; street scenes in Clovelly, tourists and donkeys ascending and descending the steep hill in the village, a woman drying a towel on pebbles, children playing on the slipway in Clovelly Harbour, the views over Minehead and towards Exmoor from North Hill, outside Minehead; the interior of the Church of All Saints in Selworthy; concluding with a series of shots of the Clifton Suspension Bridge and a final shot comprising the sun setting over the North Devon coast at Duty Point." (EAFA Database)