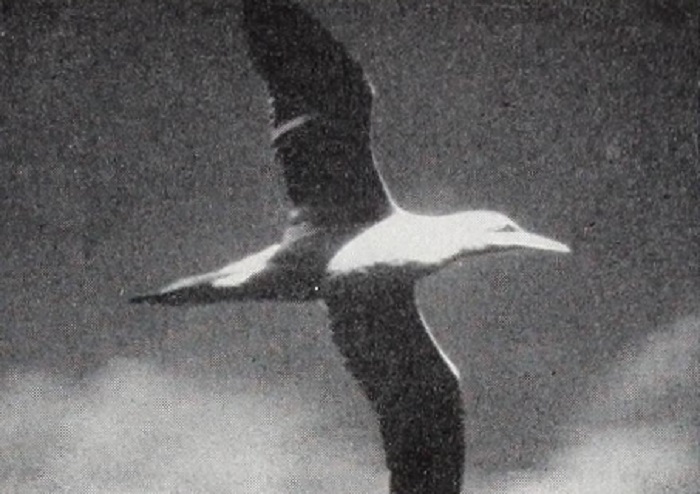 With music and narrative on wire.

"In one sense, the outstanding strength of The Gannets, Maxim Award winner for 1950, is its seemingly worst weakness. That strength is the unquestioned — but apparently accidental — entertainment which the film provides. Running a brief 400 feet of 16mm. color, the picture examines the famous gannet colony on Gaspe's Bonaventure Island, treating the giant birds with lighthearted good humor and casual unpretension. The entire accomplishment seems too easy. You could do it, you feel, over a single sunny weekend. But don't let this fool you. To begin with, there is the technique. In The Gannets, Warren Levett has employed with a knowing skill every technical artifice learned in long years of bird filming. Telephoto lenses present his gleaming subjects in crisp and astounding closeups. The follow shots of birds in flight are suave and invariably centered, while slow motion reveals arrestingly their superb aero-dynamics. Side and back lighting enhance repeatedly the natural beauty of the birds, aided on occasion by a shrewd use of the polaroid filter. Secondly, there is the subject matter treatment. Pictorially, Mr. Levett knows his way around a sequence with unerring instinct. He knows, too, the strength which lies in a pair of shears; his editing of a subject so often overladen by the amateur is incisive and refreshing. And, perfectly interwoven with the pictorial presentation, is the third strength of The Gannets — the delight of the picture's narrative. You learn things about gannets as you listen — but they're not long-winded nor in Latin — and you're scarcely conscious of the learning. What you are conscious of is that the gannet is a strange, gabby, beautiful and, sometimes, supremely ludicrous creature. You are, in a word, entertained as you are informed — and you love every light-hearted minute of it. It is only later, if at all, that you realize the true measure of this superb movie." Movie Makers, Dec. 1950, 446-447.

Discussed by Levett in "Getting 'The Gannets'" (Movie Makers, Jan. 1951, 9-10, 33). The article shares details of the filmmaker's previous trips to Gaspé peninsula, and on the film's production. Still images are shown.