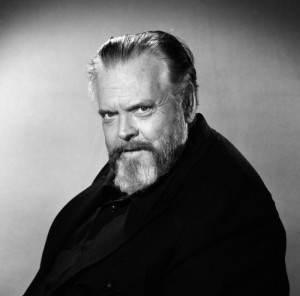 Film The Hearts of Age was included in Kino's Avant-Garde: Experimental Cinema of the 1920s and '30s

"His father was a well-to-do inventor, his mother a beautiful concert pianist; Orson Welles was gifted in many arts (magic, piano, painting) as a child. When his mother died (he was nine) he traveled the world with his father. When his father died (he was fifteen) he became the ward of Chicago's Dr. Maurice Bernstein. In 1931, he graduated from the Todd School in Woodstock, Illinois; he turned down college offers for a sketching tour of Ireland. He tried unsuccessfully to enter the London and Broadway stages, traveling some more in Morocco and Spain (where he fought in the bullring). Recommendations by Thornton Wilder and Alexander Woollcott got him into Katherine Cornell's road company, with which he made his New York debut as Tybalt in 1934. The same year, he married, directed his first short, and appeared on radio for the first time. He began working with John Houseman and formed the Mercury Theatre with him in 1937. In 1938, they produced "The Mercury Theatre on the Air", famous for its broadcast version of "The War of the Worlds" (intended as a Halloween prank). His first film to be seen by the public was Citizen Kane (1941), a commercial failure losing RKO $150,000, but regarded by many as the best film ever made. Many of his next films were commercial failures and he exiled himself to Europe in 1948. In 1956, he directed Touch of Evil (1958); it failed in the United States but won a prize at the 1958 Brussels World's Fair. In 1975, in spite of all his box-office failures, he received the American Film Institute's Lifetime Achievement Award, and in 1984, the Directors Guild of America awarded him its highest honor, the D.W. Griffith Award. His reputation as a filmmaker has climbed steadily ever since." IMDb.

Welles' first film was an amateur production titled The Hearts of Age (1934). Welles was 19 years old when he co-directed the film with William Vance.