“During the early period of his life, his mother found it necessary before washing his clothes to empty all pockets of live crabs, snails, insects, worms, etc. One suspects it still is necessary to do so. ... Many of the colorful creatures that make up the intricate web and pattern of our marine heritage will be the stars of his color motion picture program.” - Kingsport (Tennessee) News, 27 January 1954, p. 8

Dr. G. Clifford Carl (1908-1970) was a major figure in the history of British Columbia’s Provincial Museum of Natural History and Anthropology. A marine biologist, he earned his Ph.D. from the University of Toronto in 1937, and joined the museum in 1940 as biologist and acting director. He served as the museum’s Director for 27 years (1942-1969). He wrote several guidebooks on the natural history and marine life of BC. He had a key role in developing a new and much larger home for his institution, which opened in 1969 as the British Columbia Provincial Museum. His contributions are commemorated in the name of Clifford Carl Hall, the main concourse in the exhibits building.

Dr. Carl was also an avid amateur filmmaker and a member of the Victoria Amateur Movie Club. In the 1940s and 1950s, he shot and edited about twenty 16 mm films on marine life, birds, ecology, and anthropology subjects. These films were used to illustrate his talks at the Museum, school visits, and numerous presentations on the Audubon Screen Tour and Canadian Club lecture circuits. They are now preserved by the BC Archives at the Royal BC Museum. As with all the motion picture originals in the archives’ collection, the films themselves have been put in cold storage to ensure their long-term preservation.

However, the museum and archives have made analog video masters and reference copies of some of Dr. Carl’s most interesting productions, including Fur Seals on the Pribilofs, Island Exploration, Mungo Makes a Mask, Nature’s Candles—Eulachons, Nature’s Outpost—Triangle Island, and the compilation film Pacific Patterns. All but two of the preceding titles can be accessed in the archives reference room, simply by filling out out a call slip; you can watch a VHS copy at one of the VCR and monitor stations there. It seems very fitting that even 60 or 70 years after he made them, a few of Clifford Carl’s films are still available for viewing at the museum he helped to build.

The following article by Ruth Breckenridge describes Dr. Carl presenting his film Secrets of the Sea at an Audubon Screen Tour event hosted by the Sequoia Audubon Society in San Mateo, California. It appeared in The Sequoia (Bulletin of Sequoia Audobon Society), vol. 12 no. 13, April 1960, p.3. 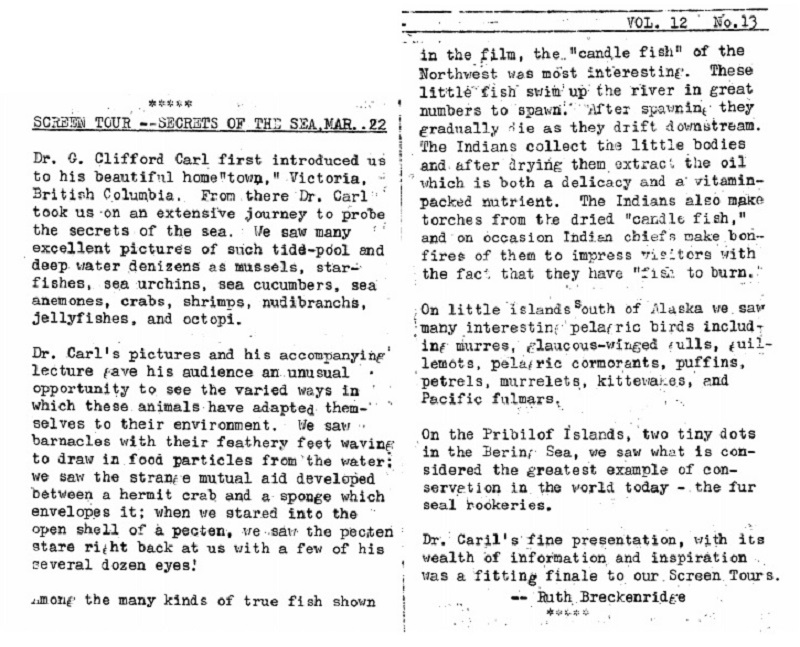